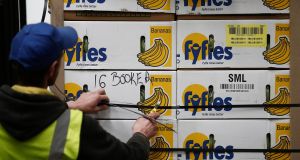 The McCann family’s Balkan Investments company has spent almost €2.6 million buying shares in Fyffes shares this week to minimise dilution of their stake as the tropical fruits distributor sold stock to add to its firepower for acquisitions.

The company, which has a market value of €492 million, said it plans to use the proceeds to “maintain its balance sheet strength” to do more deals after spending almost €140 million so far this year buying two Canadian mushroom companies.

The McCanns’ Balkan Investment vehicle, structured as an unlimited company to keep its financial affairs private, bought 1.7 million shares as part of the placing, according to calculations based off a disclosure to the stock exchange on Wednesday and a company presentation published earlier this month.

Had they not participated in the transaction, their stake would have fallen from 12.1 per cent, as of the end of June, to 10.9 per cent.

Fyffes moved in April to expand its portfolio beyond bananas, melons and pineapples by acquiring two Canadian mushroom companies, Highline Products and All Seasons, in the past six months.

Having made a failed attempt two years ago to merge with American peer Chiquita in what would have been a $1 billion (€900 million) deal, Fyffes has said it “continues to have a strong pipeline of further attractive acquisition and investment opportunities across existing and new product categories”.

Earlier this month, Fyffes reported its earnings before interest, tax, depreciation and amortisation (ebitda) rose to €44 million in the first half from €39.5 million for the same period last year.

However, it said its oldest business, bananas, grappled with “challenging” trading conditions in the first half as the dollar strengthened against the euro.

Balkan Investments also has an 11.6 per cent stake in Total Produce, a supplier of fresh produce from potatoes to tomatoes that was demerged from Fyffes in 2006. Total Produce has a market capitalisation of €527 million.

1 BOI customers to be charged twice with bank fees on New Year’s Eve
2 Irish designer of Oxford vaccine : ‘I’ve never worked so hard in my life’
3 Covid-19 will worsen housing affordability, report warns
4 Irish boss of Qantas says Covid vaccines will be mandatory
5 Chris Johns: I think we are on the cusp of an economic boom
6 Being polite in work emails is more important than ever
7 Oxford Covid-19 vaccine can be 90% effective, results show
8 Goldman Sachs advises NatWest on Ulster Bank review
9 EU transport companies fear chaos through Britain on January 1st
10 Microsoft to create 200 jobs at new €27m engineering hub in Dublin
Real news has value SUBSCRIBE

BOI customers to be charged twice with bank fees on New Year’s Eve 16:48
Taoiseach concerned at ‘complacency’ of some firms over Brexit preparation 15:46
Covid-19 will worsen housing affordability, report warns 15:30
Irish boss of Qantas says Covid vaccines will be mandatory 14:36
Aminex has roadmap to obtain gas from Tanzania project 14:11