May promises to put banking at heart of Brexit trade deal 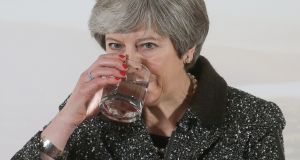 Theresa May has told City of London bosses she will put financial services at the heart of a new trade deal with the European Union, in the first formal meeting between the prime minister and the financial services sector on Brexit.

The prime minister also invited financial sector leaders – including senior figures from HSBC, Prudential, Goldman Sachs and JPMorgan Chase – to outline what they thought she should do to protect the size and influence of the City of London.

Some City bosses – led most vocally by Barclays boss Jes Staley – called for a loosening of the tax and regulatory requirements on the sector to maintain its competitiveness against rival financial centres, such as New York, according to two people in the meeting.

“Now they are rolling up their sleeves and getting down to the nitty gritty, which is good,” said one participant. “It was very practical, asking us what are the steps they need to take.”

“It’s clear the language has changed,” said another participant. “The mood music towards financial services companies is far more upbeat.” A third person, who was briefed on the discussion, said it was “encouraging and positive and people came away feeling like the sector is seen as a priority”.

Ms May kicked off the meeting by stressing that the financial sector – the UK’s biggest source of exports and tax revenue – would be a priority for the government in the next round of Brexit negotiations.

Dismissing the idea of retaining access to the single market through Norway-style membership of the European Economic Area, or through a Canada-style free trade deal that excludes most services, Ms May said she aimed to secure a “bespoke deal” for the UK.

Ms May also gave more detail on the type of “implementation period” that she expected to agree with the EU by March to give firms time to adjust between leaving the EU and the start of a new trading arrangement.

The prime minister’s confidence of achieving a special trade deal with the EU that maintains the City’s access to the bloc’s single market contrasts with the public negotiating position of senior Brussels officials.

Michel Barnier, the EU’s chief negotiator, has presented Britain with a choice of retaining access to the single market through Norway-style deal, or through a less ambitious Canada-style free-trade deal.

Several people briefed on the meeting said it came at the instigation of the treasury to give City leaders a chance to tell Ms May their main concerns about Brexit.

Chancellor of the exchequer Philip Hammond wanted Ms May to hear how eager financial institutions were for her to secure an early commitment to a multiyear transition period, the people said. – Copyright The Financial Times Limited 2018