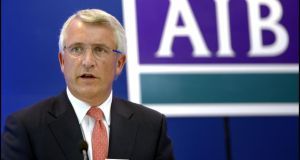 Another week and another Irish bank is back in profit for the first time since the financial crash in 2008.

The theme had already been established by Ulster Bank and Bank of Ireland with their full-year results in late February and AIB added its name to the list on Thursday with a pre-tax profit of €1.1 billion in 2014.

This was an impressive €2.8 billion turnaround on 2013 with positive news on virtually all of its key metrics.

Income rose by 31 per cent, lending approvals increased by 37 per cent, its net interest margin improved, the number of Irish owner-occupied mortgage accounts in arrears declined by 22 per cent, and operating expenses fell by 5 per cent.

There was a €185 million provision writeback last year, reflecting the level of debt restructuring and economic improvement in Ireland. This compared with a provision charge of €1.9 billion in 2013.

About 36,000 mortgage arrears customers have been provided with solutions with 90 per cent of the new payment arrangements sticking.

There was also some cheer for taxpayers with AIB set to pay a first dividend of €280 million on its €3.6 billion in preference shares, which date back to 2009. Talks with the Department of Finance on its capital restructuring “continue” although little additional detail was given.

The one question that wasn’t answered was about the new chief executive. David Duffy resigned in January and will shortly take his leave of AIB for Clydesdale in the UK. In his chairman’s statement in the annual report, Richard Pym said a successor would be appointed “shortly”.

When Duffy joined AIB in 2011, his job was to stabilise a bank that was in disarray at board level and at loggerheads with the Government, its key shareholder. It has also lost the trust of customers and staff.

Duffy delivered on his plan of cutting €350 million from its cost base while growing lending, improving margins, tackling its mortgage arrears, modernising the bank, and ultimately returning AIB to profit. In his three years at the helm, he delivered an impressive €4.8 billion turnaround in its pre-tax profit.

His successor will face a different challenge. AIB is on a slow road to privatisation with the State keen to get a return on its €20.8 billion bailout of the bank.

To quote Duffy, this will be a “multi-year” process with several moving parts. It will require the new CEO to sell the story of AIB’s recovery to international investors while also continuing to grow lending, improve margins while also managing the legacy issues from the property crash, which will be around for years to come.