Case brought by Donall Dooley against Nama struck out by consent 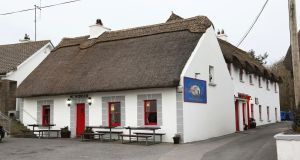 Morans on the Weir. Summary judgment orders for €6.78 million were granted against William and Sheila Moran, of Morans on the Weir, Co Galway, and Oranmore, Co Galway businessman Donall Dooley, arising from the purchase of a shopping centre and two supermarkets in Riga, Latvia, in 2006.

Summary judgment orders for €6.78 million have been granted against William and Sheila Moran, of Morans on the Weir, Co Galway, and Oranmore, Co Galway businessman Donall Dooley, arising from the purchase of a shopping centre and two supermarkets in Riga, Latvia, in 2006.

In proceedings in Kilkenny, the National Asset Management Agency (Nama) has also been granted summary judgment orders against Mr Dooley for €37.97 million and $196,766, and against him and his son, John Dooley, for €2.49 million.

A third set of linked proceedings, all heard before Mr Justice Donald Binchy, where Nama sought to have a case taken against it by Donall Dooley struck out on the grounds that it was vexatious or bound to fail, was agreed on consent. In that case Mr Dooley had alleged that Nama was acting maliciously and vindictively in taking the summary judgment proceedings against him and his son.

In the first set of proceedings, James Doherty SC, instructed by Ronan Daly Jermyn solicitors, Dublin, said on behalf of Nama that Mr and Mrs Moran, and Mr Donall Dooley, had each signed guarantees in February 2006 at a time when AIB was issuing loans to three Latvian companies in relation to investments in Riga.

The letters of offer were sent to Morans on the Weir, Co Galway, in February 2006. The loans were to three companies, DDW Sia, WDD Sia, and DWM Sia. Subsequent to the loans being issued there was a process under Latvian law whereby the companies were merged into three new Latvian entities, Juglas 45 Sia, SSC Sia, and Visku 14 Sia, respectively, and the original three companies were dissolved without being placed in liquidation.

Mr Doherty said the conditions of the guarantees stipulated that the guarantees became indemnities if the bank was unable to retrieve its funds from its customers under certain conditions which, he said, covered what had happened with the Latvian companies.

Mr Dooley, represented by Cormac Ó’Dúlacháin SC, instructed by Keane & Co solicitors, Galway, in an affidavit filed this morning, said the loans were in fact repaid, and new loans issued to new entities.

The judge noted that no evidence in this regard has been presented to the court. Mr Dooley also said that AIB did not have a licence to do business in Latvia at the time, and the loans and guarantees were, therefore, “tainted with illeglity”.

Mrs Moran, who along with her husband was represented by Conor Cahill, instructed by MacSweeney & Co solicitors, Galway, said in an affidavit that she was not a director or shareholder of any of the Latvian companies and knew nothing of any merger. Mr Cahill said there was a “fatal” lacking in the proofs presented to the court.

Mr Doherty said that under Latvian law the new entities took on the assets and liabilities of the dissolved entities. Each defendant was suggesting that the change in borrower meant that the guarantees were no longer enforceable.

Mr Ó’Dúlacháin said his client wanted the issue to go to a full hearing. A key issue was what dealings did AIB and Nama have in relation to the loans between 2007 and 2013, and who were these dealings with. It was obvious, he said, that the loans had been serviced.

However Mr Justice Binchy said he did not believe that the defendants had raised a credible defence and granted the summary judgments. It was not open to the defendants to say Nama had not submitted formal proofs about the matters before the court, without having put those matters at issue in their replying affidavits.

He noted that the defendants were not saying that the mergers had not occurred or that the new Latvian entities were not in default of payment. He granted a stay on the judgment for the duration of the appeal period post the perfection of the judgment.

Following a brief recess, the judge was told that the othere two matters had been agreed, that judgment orders could be issued in respect of Mr Dooley and his son, and that the case against Nama by Mr Dooley could be struck out. Costs were awarded to the State agency.