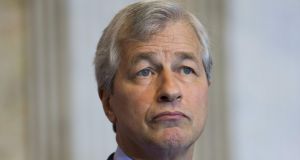 Happy days at JPMorgan Chase. After delivering a €24.4 billion profit for 2015, its best yet, chairman and chief executive Jamie Dimon, pictured, saw his remuneration advance 35 per cent to $27 million (€25 million). The bucks just get bigger and bigger. Now JPMorgan wants investment bankers to take the weekend off!

No kidding. We learn, via the Wall Street Journal, it has initiated a relaxation drive entitled “Pencils Down”. If there’s no live deal to detain them, dealmakers have been told to stay at home on Saturday and Sunday.This marks an evolution of sorts from the notion of JPMorgan’s “protected weekend”, which gave bankers an option to reserve particular weekends for weddings, reunions or whatever they do when not dealmaking. Wow.

Carlos Hernandez, head of global banking at JPMorgan, told the Journal the initiative was to get people out of the office and back home or wherever they go to relax. “At the end of the day continuity matters, developing people who understand the firm, understand the culture,” he said. Thank goodness for small mercies. According to the paper, JPMorgan isn’t imposing guidelines on how often employees should check their smartphones after the closing bell on Friday.

The expectation, however, is that most weekends will be free of time-consuming work obligations. Unless a deal is breaking, that is, and deals often break at weekends. Baggy eyes are for winners, eh?

Thus it’s not quite the end of the 100-hour week, a scourge to many but a (rather dubious) badge of honour for workaholic corporate superheroes.

“We’re not tearing the whole place upside down, it is enhancements . . . and realistic to what this generation wants,” Hernandez said.

JPMorgan is not unique. This is in keeping with Wall Street’s new-found enthusiasm for work-life balance, fashionable these days as big institutions seek to retain weary junior bankers and prevent burnout. So now we know.

It’s no surrender to take the weekend off. There has to be a better way.