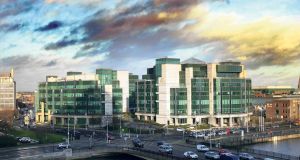 IFSC in Dublin: 5,000 new fintech jobs would represent a doubling in employment in this burgeoning part of the IFSC. Photograph: Bryan O’Brien / The Irish Times

Some 5,000 jobs could be created in Ireland in the “fintech” industry over the next five years, according to an analysis by professional services firm Deloitte.

This would represent a doubling in employment in this burgeoning part of the IFSC and would “predominantly be driven by the projected spend on IT services by financial services firms in Ireland”, Deloitte said.

“Many financial services firms are struggling with outdated legacy platforms and IT architectures that are hampering their ability to grow and innovate,” David Dalton, head of financial services at Deloitte Ireland, told The Irish Times.

“While some financial services firms have been cautious about new fintech start-ups, particularly where they are disrupting traditional business models and competing for customers, we are increasingly seeing a symbiotic relationship developing, which is helping to address these legacy issues in financial services companies.

“Our view is that the fintech and financial services industries are inter-related and mutually dependent. The connectivity between the two sectors needs to be significantly enhanced.”

Fintech is a term for technology applied to financial services, usually to support back-office functions.

More recently, it has been used for broader applications of technology, including front-end consumer products, and new entrants competing with existing players.

Mr Dalton said the timing of its report so soon after the Government’s strategy was published was “coincidental”.

Deloitte identified five factors that could shape the success of fintech over the next decade.

It said Government and industry must work to lessen the “awareness gap” between indigenous fintech firms and financial services companies operating in Ireland.

Deloitte will co-host a May “speed dating” event with the Banking and Payments Federation Ireland for both its members and fintech companies.