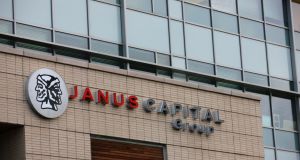 Investors yanked a record $446.5 million from an exchange-traded fund managed by Pacific Investment Management Co. (PIMCO) co-founder Bill Gross after his surprise departure from the firm on September 26th.

Pimco’s $3.1 billion Total Return ETF, which follows a similar investment strategy as the Newport Beach, California- based firm’s flagship $222 billion mutual fund, has lost 0.17 per cent since September 25th. Gross, who oversaw the fund since its March 2012 inception, left for Janus Capital Group Inc. after struggling in the face of clients pulling money and waning bond returns.

Pimco Total Return Fund may see withdrawals of as much as $150 billion, or about two-thirds of its assets, according to a report by Atanasio Pantarrotas, an analyst at Paris-based broker Kepler Cheuvreux. Competitors at DoubleLine Capital LP, Bank of New York Mellon Corp.’s Standish unit and Western Asset Management Co. said they’ve already started seeing inflows.

A BlackRock Inc. fund with a similar strategy has also benefited with the iShares Core U.S. Aggregate Bond ETF adding $403.6 million in deposits. Daily Redemptions The daily redemption from the ETF accounted for 12.5 percent of the fund’s shares outstanding, data compiled by Bloomberg show. Withdrawals slowed yesterday to about $98 million, according to data available on Pimco’s website that shows adjusted shares outstanding.

Traders said Pimco has been selling securities from the ETF. The firm asked dealers to seek bids on Sept. 26 on more than $170 million of commercial-mortgage securities guaranteed by government-backed Fannie Mae, according to two people with knowledge of the matter, who asked not to be identified because the trading isn’t public. Those securities were among the largest holdings of that type in Pimco’s Total Return exchange-traded fund, according to data compiled by Empirasign Strategies LLC and Bloomberg. Banks were also circulating a list of $77 million such bonds for sale yesterday that matched the fund’s remaining holdings, the data show.

Pimco also sold C$225 million ($201.3 million) of bonds issued by Ontario, according to data on the manager’s website. It was the fund’s largest holding as of Sept. 25.