'If the money isn’t used the way we expect it to be used, we’ll take it back'

Backed by Euro bucks, the SBCI is Ireland’s big bid to get banks lending to businesses. It’s boss says they’ll be watching closely 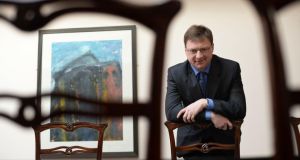 This time it will be different. If ever there was a phrase synonymous with financial folly and pre-crash delusion, this is it. It was resurrected last week, perhaps unintentionally, by the Minister for Finance at the launch of the Government’s latest bid to kick-start lending to small and medium-sized businesses.

Since the crash, banks, the primary source of capital for Irish SMEs, have put normal lending practices on hold while they repair their balance sheets. As a result, SMEs have been locked out of the market or forced to borrow at uncompetitive rates, creating a major roadblock at the heart of Ireland’s economic engine.

The new State-backed Strategic Banking Corporation of Ireland (SBCI), which is supported by German, European and Irish money, promises, once and for all, to address the problem. It is the latest in a long line of Government-sponsored initiatives aimed at turning back on the credit tap– all of which have failed or, at best, met with mixed results.

The SBCI, however, hits the ground at an auspicious time, with the Irish economy growing at its fastest rate in seven years and Frankfurt unleashing an unprecedented €1.1 trillion stimulus package on Europe’s ailing economy.

The man tasked with overseeing its operation is newly installed chief executive Nick Ashmore (45). Having worked at the National Pensions Reserve Fund since 2006, most recently as the head of private equity and the fund’s deputy director, the Scottish-born chartered accountant is no blow-in to Irish affairs. Ashmore arrived in Ireland for the tail end of the banking folly and had a front-row seat for the ensuing crash.

He says the new entity has three core objectives; to deliver a stream of long-term, low-cost funding to SMEs; to repair market failure; and to drive competition in the State’s depleted banking sector.

The SBCI is designed to play “a sustainable roll in the market over a long period of time – one that can flex up and down as conditions dictate.”

On the basis of recent Central Bank lending statistics and more agressive advertising by banks, Ashmore believes there’s been a sea-change in lending conditions here over the past 12 months.

“The banks are finished deleveraging,” he says. “They’re finished shrinking their loan books. They now need to grow . . . and they’re motivated to start lending again.”

“Obviously there are remaining legacy issues to deal with but, as a whole, banks are moving forward. “

From next month, the SBCI will begin channelling the first €400 million of its money into the sector through its “on-lenders”, AIB and Bank of Ireland.

This narrow pool is likely to be widened within months to include Ulster Bank, Permanent TSB and a range of non-bank lenders involved in vehicle and asset leasing and, perhaps, invoice discounting.

Loans accessed through the SBCI will come at a discount of at least 1 per cent, which must be passed on in full to customers, bringing the cost of capital here closer to European levels.

Loans of up €5 million will be offered to eligible SMEs for periods of between two and 10 years. The longer maturities are thought fill a gap in the current market, which typically provides loans for 3-5 years.

The initial line of SBCI products will also include a refinancing facility for firms whose current loans are with banks exiting the Irish market, with about half the first tranche of funding earmarked for this.

There is also a specific loan product for agribusiness SMEs and farmers to reflect the sector’s prominent position in Ireland’s economic recovery.

Because the funding is coming from state-backed institutions, there are specific criteria around the purposes of the loan – essentially, they can’t be used to purchase land, commercial real estate or, in the case of farmers, livestock.

“To be clear, they’re not designed for the company that’s saddled with legacy property debt,” says Ashmore. “If the bank can separate those two, and the company needs a funding line for long-term working capital to invest in its business, and the property debt is being dealt with in another way, then absolutely.”

Using Bank of Ireland and AIB (the two institutions that have presided more than any others over the current credit drought) to deploy the funds was always going to be controversial. Ashmore says the primary reason for choosing the pillar banks was because of their vast “distribution networks”. Between them they command about two-thirds of SME lending in Ireland.

He also says it would have been impractical to have small contractors or family-run businesses from across the country travelling to Dublin to negotiate directly with the SBCI.

The banks will, however, have to submit detailed data on where the money is going, and whether funding contravenes state aid rules, a complex task in itself.

While lenders are compelled to pass on the discount, they have discretion on how the money is deployed, as well as full risk assessment control.

AIB confirmed plans to reduce its standard variable business loan rate across the board by 2 per cent to 4.5 per cent, saying it was matching the 1 per cent discount from the SBCI with a further 1 per cent of its own. Bank of Ireland said only that it would pass on the 1 per cent discount across a range of rates, which were dependent on the size and security of the loan.

As to whether to prospective SME customers will have to ask for the loans, there remains some confusion.

An AIB spokeswoman said the SBCI loans would be the “products of choice” offered to eligible SMEs. Bank of Ireland says it expects prospective SMEs to become gradually aware of the products as they come on-stream.

A big concern is whether banks will cherry-pick a certain cohort of favoured clients, perhaps those already capable of accessing credit, effectively limiting the reach of the initiative.

Ashmore’s matter-of-fact answer: “If the money isn’t used the way we expect it to be used, we’ll take it back.”

Another issue centres on what happens if the bank’s portfolio of loans is paid down faster than the bank’s term with the SBCI, potentially allowing the bank a freehand to lend the money elsewhere outside the SME sector .

Ashmore insists that the money has to be recycled into similar SME lending or paid back to the SBCI. “This isn’t a one- time use it or lose it. You’ve have to keep using it.”

He says the SBCI will keep a close eye on the money at all stages.

One stated objective of the new entity is to identify and repair market failure. As an example, Ashmore cites a manufacturing firm that wants to fund a new production line with a 15- to 20-year shelf life.

“So the return on investment,” he says, “would be moderate over a long period of time rather than a big, explosive change in their business.”

In many cases, the production unit may be highly customised and specific to the business, and therefore – as collateral for a bank – of limited value. So the bank may not be willing to lend longer-term with same degree of payment flexibility that the company seeks.

Ashmore says the extended terms attached to the SBCI’s initial product line will better cater for these type of loan applications. If areas of the economy still remain locked out after the initial phase of funding, he says, the SBCI may consider risk-sharing with banks.

He describes lending practices during the boom in Ireland as “absolutely toxic”. “There really wasn’t a credit culture. Anyone could walk into a bank and borrow for anything based on who they were.”

Lenders didn’t really appraise business plans when they were secured through property. A question then arises: will the same banks have the necessary expertise to evaluate the underlying health of prospective SMEs?

Many have criticised the Government’s decision not to establish a State development bank, which might bring a fresh set of skills to the market, something broadly promised in the original programme for Government.

However, Ashmore says SBCI programme has a wider applicability, and by involving a greater range of lenders will make the sector more competitive.

In any case, he says, establishing a state development bank is a long and complex process.

Since the original idea was first hatched as part of negotiations between Taoiseach Enda Kenny and German chancellor Angela Merkel at the end of 2013, the SBCI has been established in record time.

“12 months from start to finish,” he says, noting the equivalent British Business Bank, which opened last year, took four years to get off the ground.

The UK bank is modelled on the Germany’s KfW, the post-war development bank, which has evolved into a financial powerhouse. With a limited presence on the ground, KfW lends to a list of state-owned and retail banks that typically fund the German Mittelstand – the welter of large SMEs and mid-cap corporations that make up the country’s industrial backbone.

Ireland’s version of KfW needed to tailored to the backbone of Ireland’s economy, which is typified by smaller, family-run SMEs, says Ashmore

“By being focused so widely in terms of its borrower base, the SBCI is looking to support smaller SMEs rather than just a small number of fast-moving companies.”

He points to the hospitality sector, which has created 30,000 jobs in the past three years.

Ashmore says he and his nine-strong team have set aside a sizeable advertising budget to announce its arrival on the scene.

So what constitutes success?

“In near-term, it’s starting to work with more players, seeing our loans work in the market, seeing SMEs drawing them down and using them.”

Whether the SBCI can turn the credit tide, only time will tell.

What you might expect: He studied accountancy at the University of Aberdeen and trained to be a charted accountant with Grant Thornton

What might surprise: He is a keen motorcyclist and used to navigate rushhour on a BMW 650 until recently. He says his new job brings him in before the rush and out after.

1 How much state pension will I get next year?
2 Oxford Covid vaccine trials offer hope for elderly
3 Tesco takes to the skies with home delivery by drone
4 Ulster Bank to introduce new card payment controls on app
5 How long can Government afford to keep State pension age at 66?
6 Covid-19 will worsen shortage of accountants, says CPA Ireland
7 State has won more than 80 Brexit-related FDI projects
8 RTÉ to seek 70 voluntary redundancies as ‘large costs’ beckon in 2021
9 Apple planning updates to its AirPods earbuds next year
10 Retailers accused of ‘stealing business’ from rivals by flouting restrictions
Real news has value SUBSCRIBE