Honohan saw only a slim chance of success for bailout 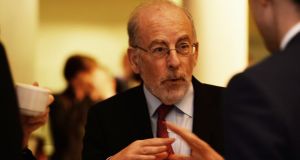 Governor of the Central Bank Patrick Honohan at the IMF conference in Dublin Castle on Monday. Photograph: Cyril Byrne / THE IRISH TIMES

Central bank chief Patrick Honohan saw only a slim chance of rescuing Ireland’s economy when he helped negotiate an international bailout in 2010, he said on Monday.

Ireland became the second euro zone country after Greece to take an EU/IMF bailout when it was locked out of lending markets in late 2010. But it was the first to complete its programme, just over a year ago, and can now borrow from debt markets at record low rates.

Mr Honohan said at the time the programme was designed, International Monetary Fund staff and Irish negotiators – including him – saw a high risk of failure.

“The risk was high that, at the end of the three years of the programme, the indebtedness of the government would be too high for the government to have access to the market at any reasonable terms, and would give rise to the need for a second programme and a prolonged period of uncertainty,”

Mr Honohan said in the text of a speech. “Partly due to some good fortune as well as to the sustained adherence to an effective fiscal adjustment programme, Ireland has done much better than it might have – and much better than I and others expected – in turning around a situation, the gravity of which became increasingly evident during 2009 and 2010.”

Addressing an IMF conference on lessons from the bailout, Mr Honohan criticised Ireland’s “troika” of lenders for opposing proposals to impose losses on senior debt-holders.

Significant flaw He said the opposition to “bailing-in” such bondholders, particularly those holding debt from Irish banks that eventually had to be wound down, was a “significant flaw in the programme design”.

“True, there would probably have been some adverse reputational effect for Ireland from a bail-in, but very limited if it had been part of the programme design as was envisaged by some Troika officials,” he said, referring to the group of official lenders.

Not allowing a bail-in of senior bank bondholders as part of Ireland’s €67.5 billion EU-IMF bailout was a “significant flaw” of the assistance programme, the Governor of the Central Bank of Ireland Patrick Honohan said .

“If the reason was potential spillover effects onto international banking markets from a bail-in, then it would only have been fair, and very much feasible, for the Troika to arrange the difference being made available from other sources,” Mr Honohan told a conference in Dublin organised by the IMF on the lessons of Ireland’s recovery.

“The idea that the newly-unguaranteed remaining bondholders in the failed banks Anglo and INBS might now receive Government largesse was rightly repugnant to many observers at home and abroad.”

However, Mr Honohan said burning bondholders would not have yielded the type of saving that many commentators have suggested.

“This matter must be kept in perspective,” he said. “Most of the bonds outstanding from the Irish banks at that time were not in practice bailable because they were either Government guaranteed or asset-covered bonds. The corridor discussions related to a figure of about €16 billion of unguaranteed bonds, of which the two gone-concern banks [Anglo Irish Bank and Irish Nationwide] accounted at stage for less than a third.

“This is still a lot of money of course, but would not have resulted in any relatively large or noticeable alleviation of the belt-tightening, bearing in mind that each year from 2008 saw an additional fiscal consolidation effort to reach an annual figure of around €30 billion by 2014.

“In the end, the sums injected by the Government into these two banks have been financed at very low interest cost following the liquidation of Irish Bank Resolution Corporation and the exchange of the promissory notes for long-term bonds. Nevertheless, the pressure that was brought to bear on the Government in this episode continues to rankle in Ireland.”

Mr Honohan said the bailout was a “significant success” without which the “wellbeing of the people” of Ireland would have been “very much lower”.

“Indeed, I would go further to say that, partly due to some good fortune as well as to the sustained adherence to an effective fiscal adjustment programme, Ireland has done much better than it might have – and much better than I and others expected – in turning around a situation, the gravity of which became increasingly evident during 2009 and 2010.”