GAM prepares to pay back investors in crisis-hit funds

Initial payments planned of 60-87% of assets held in funds 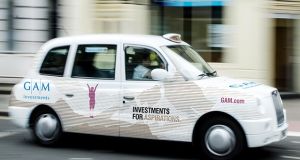 GAM said it expected to make initial payments to investors in its frozen bond funds ranging from 60 per cent to 87 per cent of the assets held, as the Swiss asset manager attempts to stabilise its business following the suspension of one of its top portfolio managers.

GAM removed portfolio manager Tim Haywood in late July after an internal investigation, and has accused him of poor due diligence, breaches of its gifts and entertainments policy and the inappropriate use of personal email. It subsequently blocked investors from redeeming any of the SFr7.3 billion (€6.4 billion) of capital held in the range of absolute return bond funds (ARBF) managed by Mr Haywood after being flooded with redemption requests “in excess of 10 per cent” of the funds’ assets. It then decided to liquidate the funds.

Bloomberg reported on Monday that investors in GAM funds that are not frozen to redemptions had withdrawn an estimated $2.3 billion (€1.96 billion) after Mr Haywood’s suspension up until August 17th.

The Swiss group said first payments would return 74-87 per cent of Luxembourg and Irish-domiciled funds, and 60-66 per cent of assets in the Cayman master fund and the associated Cayman and Australian feeder funds. Some of the payments will begin from September 6th.

It expects to make further payments before the end of September and to “continue distributions in the coming months, dependent on market conditions”.

GAM appeared to be recovering, with improving financial performance and rising assets under management throughout 2017.

But in mid-July its share price plunged after it announced a hefty write-off related to its 2016 purchase of UK hedge fund Cantab. The subsequent news of Mr Haywood’s suspension and the redemption gate placed on the ARBF funds caused the share price to fall more than 35 per cent in three weeks.

It has created new roles, including a head of investments to provide oversight across portfolio management and trading, a group head of compliance, a head of front office controls, and a head of trading.