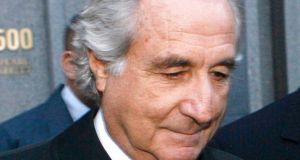 Bernard Madoff pleaded guilty in 2009 to orchestrating what prosecutors described as the biggest Ponzi scheme in history, using $65 billion in real and artificial assets. He admitted using money from new clients to pay off earlier investors and was sentenced to 150 years in prison. Photograph: Lucas Jackson/Reuters

The Irish arm of HSBC bank is being sued for more than half a billion dollars arising from the Ponzi scheme run by jailed US fraudster Bernard Madoff.

The case is centred on the role of banks as “custodians” to investment funds that deposited money with Madoff entities.

Mr Justice Peter Kelly yesterday granted an application by John Gleeson SC, for Defender, to fast-track the proceedings in the Commercial Court.

Michael Cush SC, for the HSBC unit, consented to transfer and the sides also agreed a timetable for exchange of legal documents for the action, to be heard early next year.

Defender alleges the HSBC unit is in breach of a custodian agreement of May 2007 in the manner in which it appointed, or continued the appointment, of Bernard L Madoff Investment Securities as sub-custodian. It is alleged HSBC Institutional Trust Services (Ireland) (HITSI) failed, in particular, to carry out any, or any appropriate, due diligence and/or monitoring and/or supervision of the actions of the Madoff firm.

Defender wants an order directing the HSBC subsidiary to pay a sum of $539,725,585 which, it is claimed, was represented by HITSI to be held on the Defender account in November 2008, the last valuation date prior to dealing being suspended in December 2008.

Among a series of claims, the fund alleges HSBC failed to warn it that its assets were endangered and failed to advise it that HSBC was not in a position to confirm the existence of its assets. It also claims HITSI failed to communicate to it concerns held by HBSC concerning the Madoff business.

The fund is also claiming damages on grounds including for alleged negligence and breach of contract and wants additional orders requiring that HITSI indemnify it against any claims made against it arising from the loss of the funds.

The case is the latest of some 50 sets of proceedings, involving claims for hundreds of millions of euro, to have been initiated here arising from the Madoff collapse.

Bernard Madoff pleaded guilty in 2009 to orchestrating what prosecutors described as the biggest Ponzi scheme in history, using $65 billion in real and artificial assets.