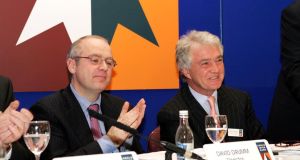 Other high-profile Anglo executives John Bowe and Tom Browne have been directed to appear on July 24th. Mr Bowe was a former head of capital markets at the bank and featured prominently in the Anglo Tapes controversy.

Mr McAteer and Mr Whelan were found guilty last year of giving illegal loans to 10 developers to buy shares in the bank and ordered to do community service. This followed a 48-day trial.

In addition, former Irish Nationwide Building Society chairman Michael Walsh has been directed to attend on September 2nd, along with John Stanley Purcell, a former director with the institution.

Anglo and INBS received €34.7 billion in bailout cash from Irish taxpayers following the crash of the Irish financial sector in late 2008.

However, no date has yet been set for the appearance of INBS’s former chief executive Michael Fingleton, who was issued with a notice to attend the committee on May 21st.

Other high profile players in the financial sector before and after the crash who have yet to be given a date include, Alan Dukes, the former chairman of Irish Bank Resolution Corporation, Mike Aynsley, IBRC’s ex chief executive, Gillian Bowler, a former chair of Irish Life & Permanent, Gary McGann, a former director of Anglo, Fergus Murphy, a former head of EBS Building Society who is now an executive with AIB, and Matt Moran, an executive with Anglo.

These directions were issued late yesterday as part of the latest tranche of communications by the Inquiry to witnesses to appear before the committee, which is investigating the events that led up to the financial crash in 2008.

The 11-person committee is being chaired by the Labour Party’s Ciarán Lynch.

Former Taoiseach Bertie Ahern has been asked to appear on July 16th while the current holder of the office Enda Kenny will appear a week later, along with jobs minister Richard Bruton.

Tánaiste Joan Burton will appear on the same date along with the former Labour Party leader Pat Rabbitte.

The Minister for Finance Michael Noonan is set to go in front of the committee on September 10th.

It now remains to be seen if all of those directed to appear will actually turn up at the committee, in particular Mr Drumm, who moved to the United States after his exit from Anglo and has shown little interest in returning to Ireland.