Deutsche Bank to cut workforce by a quarter to 75,000

About 23,000 jobs to go in cost-cut by John Cryan, new CEO of Germany’s biggest bank 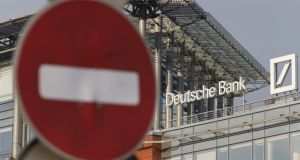 Deutsche Bank: chief executive John Cryan presented preliminary details of the cost-cutting plan to members of the supervisory board at the weekend. A spokesman for the bank declined to comment. Photograph: Sergei Karpukhin/Reuters

Deutsche Bank aims to cut roughly 23,000 jobs, or about one quarter of its staff, through layoffs mainly in technology activities and by spinning off its PostBank division, financial sources said on Monday.

That would bring the group’s workforce down to around 75,000 full-time positions under a reorganisation being finalised by new chief executive John Cryan, who took control of Germany’s biggest bank in July with the promise to cut costs.

Mr Cryan presented preliminary details of the plan to members of the supervisory board at the weekend. A spokesman for the bank declined comment.

Deutsche’s share price has suffered badly under stalled reforms and rising costs on top of fines and settlements that have pushed the bank down to the bottom of the valuation rankings of global investment banks.

“This is the first time ever that you had the feeling that somebody is talking straight,” said one of the sources. “But the problem is he has to deliver soon.”

Deutsche is mainly reviewing cuts to the parts of its technology and back office operations that process transactions and work orders for staff who deal with clients.

A significant number of the roughly 20,000 positions in that area will be reviewed for possible cuts, a financial source said. Back-office jobs in the group’s large investment banking division will be concentrated in London, New York and Frankfurt, the source said.

PostBank has about 15,000 positions, pointing to roughly 8,000 layoffs at Deutsche once the unit’s spinoff is completed as planned in 2016.

Mr Cryan aims to present details of the restructuring plan before October, close to when the new chief executive of investment banking rival Credit Suisse, Tidjane Thiam, is expected to present his plans for reforms.

Other European banks, including Italy’s UniCredit, are also in the process of major job cuts. UniCredit, Italy’s biggest bank by assets, is planning to cut around 10,000 jobs, or 7 per cent of its workforce, as it seeks to slash costs and boost profits.

1 Who are Ireland’s 17 billionaires?
2 Farmer seeks to challenge €3.6bn Intel plan in High Court
3 Paschal Donohoe's biggest regret: 'Not managing the National Children’s Hospital better'
4 Cosgrave should give his speech to Web Summit’s partners in Saudi Arabia
5 Ireland v the rest of the world: Do we pay too much tax?
6 Auction politics: Can we afford to pay for the parties' election promises?
7 Cairn Homes gets permission for 426 homes near Greystones
8 Ryanair wants Irish courts to block Skyscanner from selling its flights
9 Facial hair trends help Procter & Gamble recover
Real news has value SUBSCRIBE