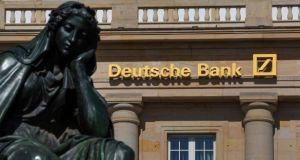 An analyst at Deutsche Bank has said “RBS is particularly impacted by the current environment” because it has already slashed its deposit rates and costs deeply, meaning it has less room to manoeuvre. Photograph: Krisztian Bocsi/Bloomberg

Deutsche Bank has become the latest to outline a gloomy forecast for the financial sector, focusing on Royal Bank of Scotland as particularly vulnerable.

David Lock, banks analyst at Deutsche Bank said “overall we think that the lower-for-longer [interest rate] environment is clearly negative for the sector in the long term”.

Last week Citi outlined the detrimental impact the Bank of England’s rate cut will have on UK banks’ earnings.

Beyond this, Mr Lock outlined a slew of further threats to UK banks, including “lower growth, higher cost of risk, regulatory change, [as well as] greater litigation, conduct and restructuring charges than forecast”.

Although these issues apply to most large UK banks, Mr Lock pinpoints RBS as the most vulnerable, and on Monday downgraded his rating to “sell” and slashed his target price from 200p to 170p.

He said “RBS is particularly impacted by the current environment” because it has already slashed its deposit rates and costs deeply, meaning it has less room to manoeuvre.

It also has less scope to reduce its subordinated debt costs through redemptions – it currently pays a yield of 4 per cent, compared with 8 per cent for Lloyds.

Mr Lock also predicts potentially painful litigation costs, pencilling in £4.7 billion for the second half of 2016 and 2017, and warning no charges have yet been taken for US DoJ RMBS investigations “which may be substantial”.

Deutsche Bank has also downgraded Lloyds to “hold”, noting: “Lloyds should benefit in near term from falling deposit costs and potential sub-debt redemptions. However, we see risks from remortgage churn in medium/longer term.”

But on a brighter note, Mr Lock has upgraded challenger bank Aldermore to “buy”, raising his target price from 170p to 188p because it “stands the most to gain from the BoE rate cut” and funding for lending scheme as “it allows additional cheap funding for growth”.