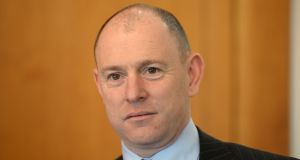 David Harney, managing director of Irish Life corporate business is to take over as chief executive.

Irish Life has announced that David Harney, the managing director of its corporate business, will take over as chief executive from June 30th, succeeding Canadian Bill Kyle.

During his time with the business, Mr Kyle oversaw the merger of Irish Life with Canada Life, a subsidiary of Great-West Lifeco. It also coincided with a significant expansion of the business here and plans to build a health insurance division from the acquisition of Aviva’s subsidiary in Ireland and its merger with GloHealth, where Irish Life is already a major shareholder.

Commenting on the change of leadership, Paul Mahon, president and chief executive of Great-West Lifeco, said: “Under Bill’s leadership over the past three years, Irish Life has successfully integrated the former Canada Life business in Ireland, strengthened its customer focus, repositioned the Irish Life brand, introduced innovative products in the Irish market, and grown market share,”

Mr Harney has worked in Irish Life since 1986 and is a member of the senior leadership team. He has led Irish Life Corporate Business since 2008 and spearheaded the group’s investment in GloHealth and its recent acquisition of Aviva Health Insurance Ltd, subject to regulatory approval.