David Drumm to face Anglo charges on arrival from US 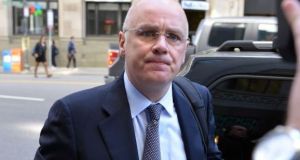 He is returning to Ireland from the US, having dropped his legal challenge against extradition last month, and is expected to face 33 charges relating to transactions carried out ahead of the collapse of Anglo. He has denied any wrongdoing.

It is likely Mr Drumm (49) will be brought to Bridewell Garda station, in the city, straight from Dublin Airport.

He will be formally charged and then brought to the Criminal Courts of Justice.

A relative of Mr Drumm said they were “very pleased he is back in Ireland” and they “will be there to support him”.

Mr Drumm later said he understood the DPP would not agree to that and would oppose his bail application. If denied bail at the District Court, he can appeal to the High Court.

A spokesman for the Department of Justice said a person who is surrendered to Ireland on foot of an extradition order, is brought before the court in the same manner as any other person facing criminal charges.

Mr Drumm is accused of forgery, conspiracy and false accounting for loans in 2008 designed to buttress Anglo’s plunging share price.