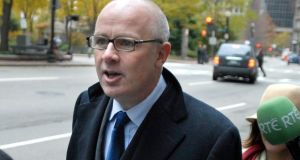 Former Anglo Irish Bank chief executive David Drumm has accused the bank and the official overseeing his US bankruptcy of a “tirade of vilification” of him.

Former Anglo Irish Bank chief executive David Drumm has accused the bank and the official overseeing his US bankruptcy of a “tirade of vilification” of him.

Mr Drumm made the claim in a new legal filing to a US appeals court where he is seeking, for the second time, to reverse the ruling of a Massachusetts judge and have debts of €10 million discharged with a declaration of bankruptcy.

The former banker, who is representing himself in his appeal to the Boston-based First Circuit Court of Appeals, lost his bid for a fresh financial start in 2015 when the Massachusetts bankruptcy court found that he had deliberately failed to disclose hundreds of thousands of dollars in asset and cash transfers to his wife. That ruling was upheld on appeal by the US District Court last year.

Mr Drumm has blamed his US bankruptcy lawyers for not advising him to disclose the transfers to his wife Lorraine that began as the banking crisis deepened in September 2008 and continued as the bank edged towards collapse and after he resigned from the bank in December 2008.

On Friday, in the latest twist in the five-year-old bankruptcy case, Mr Drumm said in a 12-page replying brief that IBRC and Ms Dwyer were vilifying him to distract the court from considering Mr Drumm’s appeals arguments and in particular the clear testimony of “credible witnesses other than Mr Drumm.”

“It is abundantly clear that [THEY]do not wish for the court to consider Mr Drumm’s actual appeal arguments, but rather to bias the court with their vilification of Mr Drumm and to hope that the court will be persuaded by this,” he wrote, and reject his second appeal of the bankruptcy ruling.

He claimed that their brief contesting his appeal last month was “once again replete with hyperbole” and contained “a regurgitation of their entire case over 62 pages” but did not address his arguments for the ruling to be overturned.

The Dubliner (49) said that the appellees “shamelessly claim” that his argument that he voluntarily disclosed everything and neither the trustee or the bank had to discover anything was, as they put it, “demonstrably false.”

“This is an outrageous statement… to make when they are acutely aware that there is not one scintilla of evidence on the record of any item concerning Mr Drumm’s financial affairs being ‘discovered’ by the trustee or anyone else,” he said.

It was “undisputed that mistakes were made” while compiling the original statements of his financial affairs to the bankruptcy court in late 2010, he admitted, “but the record is clear that Mr Drumm provided comprehensive disclosures to his counsel and to the trustee in a highly organised manner.”

He accused the bank and the trustee of misleading the court into believing that it was Mr Drumm who chose not to settle Irish litigation taken by the bank in 2009. He made several attempts to settle with the bank since then, he said.

“The bank was never permitted to entertain settling with Mr Drumm, instead choosing to pursue litigation regardless of the cost, which at this point amounts to several million dollars essentially funded by Ireland’s taxpayers,” he said.

“Mr Drumm is a much vilified person in certain sections of the Irish media and the claims bank is under the ownership and control of the Irish Government, ” he added.

Repeating his charge of political factors in pursuing him legally in the US and Ireland, Mr Drumm said that the “history of un-commercial and politically motivated actions by the bank” had made this case “so difficult” for him.

“The bank has never shown concern for collection of the debt but rather the very public pursuit of Mr Drumm has been their objective, at massive cost to the Irish taxpayers who now own the bank,’ he said.

He signed off the legal filing with an address in Skerries, Co Dublin.

In March Mr Drumm returned to Ireland from Massachusetts - his home since 2009 - following extradition proceedings taken by the US government last October acting on behalf of the Irish authorities.

He faces two trials in 2017 and 2018 in connection with alleged offenses committed while he was chief executive of Anglo. He is contesting the charges.