Competition concern over bank lending to SMEs in UK

AIB and Bank of Ireland among institutions reviewed by OFT 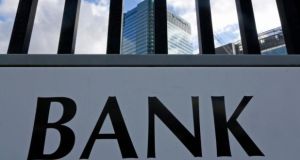 AIB and Bank of Ireland are among a number of banks that may be making it difficult for small companies to access finance in Britain, according to the Office of Fair Trading (OFT).

The OFT, which is set to be replaced by the incoming Competition and Markets Authority next month, said in an update today that its analysis had found possible competition concerns in SME banking in the market.

It said the four largest providers of services to small firms account for over 80 per cent of SME’s main banking relationships in Britain and about 90 per cent in Northern Ireland.

“Barriers to entry and expansion have apparently contributed to smaller providers finding it difficult to enter and expand their business across the core business banking products,” the body said.

The OFT noted that some actions have been taken, or are planned, to respond to competition concerns in retail banking, including changes to the authorisation regime for new banks, the new Current Account Switching Service and proposals to increase the availability of credit information to help newer or smaller providers of finance to compete.

However, it said that despite these developments, there are concerns that the provision of business current accounts and loans remains is concentrated among a small number of major banks. In addition, it said SMEs find it hard to differentiate between providers, leading to low levels of shopping around and switching, and low awareness of alternative sources of finance.

“A concern is that these factors, in combination, may reduce the incentive for providers to compete on price, invest in service delivery and quality or innovate, which may mean that SMEs do not get the best deal from their banking provider. They could also be consistent with a provisional finding that the statutory test for a market investigation reference is met,” it said.

“SMEs generally exhibit a significant degree of inertia and a low level of engagement with their banking provider(s), albeit some highly value their relationship with their bank and their bank’s products and services. Shopping around for business current accounts and loans is limited, as is switching provider. SMEs also perceive little benefit to switching,” the body added.

The OFT advised that its analysis is not complete and it is some way before deciding whether a full investigation is required. The CMA is to complete the study as part of a wider examination of competition in retail banking.

The CMA’s further investigation was described as “a welcome development” by John Longworth, director general of the British Chambers of Commerce. “While some progress has been made in recent years, including the new account switching service for businesses, greater competition is required to ensure that business customers across the UK are presented with a real choice on the type of finance offered, lending rates, terms and conditions, and level of service,” Mr Longworth said.