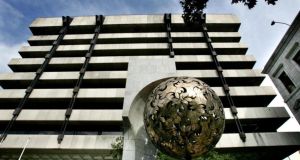 The Central Bank said yesterday that it identified an issue with regard to “delays in increasing case reserves on large claims in a timely manner and this informed the terms of an internal audit that RSA had already scheduled in relation to the same area”.

The Central Bank of Ireland identified concerns about the operations of insurer RSA Ireland some three months before three senior executives at the company were suspended by its UK parent.

This emerged yesterday from a statement from the Central Bank detailing its involvement in uncovering the issues that have led to an investigation being conduction by RSA, which has also injected €100 million in capital to bolster the Irish unit’s reserves.

The regulator said it conducted eight on-site inspections at RSA over a two-year period and had “ongoing” meetings with key executives including the chief executive Philip Smyth and chief financial officer Rory O’Connor.

Regulator supervision
This was part of an intensification by the regulator of its supervision of non-life reserving and pricing.

Smyth and O’Connor, along with claims director Peter Burke, were suspended by RSA on Friday. The company said this was “pending the outcome of an investigation into issues in the Irish claims and finance functions which were identified during a routine internal audit”.

RSA also issued a profit warning stating that its operating result for 2013 would be £70 million lower than previously guided as a result of the difficulties here.

The Central Bank said yesterday that it identified an issue with regard to “delays in increasing case reserves on large claims in a timely manner and this informed the terms of an internal audit that RSA had already scheduled in relation to the same area”.

Internal audit
The regulator said RSA brought the findings of the internal audit report to its attention as soon as they became known.

The terms of reference for a further multistranded investigation and review were outlined to the Central Bank as were the interim measures that the company planned in relation to the executive team.

Further additional measures that the regulator felt were necessary were incorporated by RSA into its actions.

“The RSA Group has assured the Central Bank that it will provide any further capital required should it be necessary at the end of the current investigation,” the regulator said yesterday.

The regulator said no other individuals in RSA, other than the three named last Friday, is “under threat of suspension or is involved in a disciplinary process in relation to this matter”.

Simon Lee, chief executive of the insurers UK parent, said yesterday that the results of a routine audit in mid-October triggered its investigation into claims irregularities and accounting issues at its Irish unit.

The probe centres on the “timing of the recognition of earned premiums“ and “the booking of large losses“ within its claims division over the past two years, chief financial officer Richard Houghton told analysts on a conference call.

It also emerged from the Central Bank that PwC has been “onsite” within RSA’s Irish operation since the week beginning October 28th. Additional reporting: Bloomberg