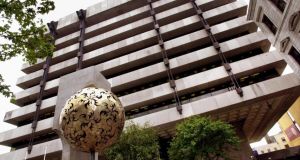 The Central Bank pointed out that PwC has been “on site” within RSA’s Irish operation since the week beginning October 28th and had not been brought in over the weekend, as may have been the impression given by RSA. Photograph: Matt Kavanagh

RSA seems to have a been somewhat economical with the the truth when it comes to the Central Bank’s role in uncovering problems at its Irish subsidiary. Chief executive Simon Lee claimed earlier this week that the results of a routine audit in mid-October triggered its investigation into claims irregularities and accounting issues at its Irish unit.

It may have been the message that the wider market wanted to hear – that RSA’s internal systems were working – but it appears it did not go down very well in Dame Street, where the Central Bank has been coming in for some heat over its role. How, many were asking, was it possible for yet another hole in the balance sheet of an insurance company go undetected in the wake of the Quinn Insurance fiasco, never mind the root-and-branch overhaul of the regulator after the banking crash?

The criticism seems to have stung the regulator into action and it issued its own version of events to the media. It said that it conducted eight on-site inspections at RSA over a two-year period and had “ongoing” meetings with key executives including the now suspended chief executive Philip Smyth and chief financial officer Rory O’Connor. It was during one of these visits presumably that it identified a problem with the reserves being made for large cases and brought it to the attention of RSA. These were then investigated as part of an internal audit already scheduled for the Irish operation. And the rest, as they say, its history.

Well, almost. The Central Bank also pointed out that PwC has been “on site” within RSA’s Irish operation since the week beginning October 28th and had not been brought in over the weekend, as may have been the impression given by RSA.

The desire of the senior management of RSA to put as good a gloss as possible
on its Irish problems is understandable. And regulators usually play ball in these situations, figuring that bolstering confidence in a troubled institutions is more important than blowing their own trumpet. However, RSA may have overlooked the fact the regulator has spent the last four years painstakingly rebuilding a reputation that was on the floor in 2008 and would be uber-sensitive to any suggestion that it was asleep on the job.

Someone must pay for credit unions mess
There was a whiff of irony to the news this week that taxpayers are coughing up for yet another bailout of a private financial institution, coming as it did just days after the troika’s final “site inspection”.

Ireland was supposed to be finished with all these financial industry bailouts. “Not a penny more,” we were told by the Government upon its election. Not a penny – but €54 million.

The latest rescue deal, for Newbridge Credit Union (NCU), means the State will plug the hole in the union’s balance sheet before ramming it into Permanent TSB, itself 99 per cent State-owned following its own bailout.

Is this the crippled saving the lame?

For nigh on a decade the directors of NCU fought a running battle with the Central Bank over NCU’s governance. The regulator got its own back on Sunday, filing a damning High Court affidavit severely criticising the directors for the way NCU was run.

The directors, past and present, deny they did anything wrong, and emotions are running high. Breda Reid, who resigned from the board in January, said the loss of NCU felt like a “death” to her. “All my family and friends are members of NCU. Why would I want to damage it?” she told The Irish Times.

The current board has vowed to mount a legal challenge to reverse or amend the PTSB deal, something the regulator says “cannot be undone”.

But who will cover the cost of the directors’ latest challenge to the authority of the Central Bank? The word is that the NCU directors will receive assistance from the Credit Union Development Association, the rival representative body to the Irish league of Credit Unions (ILCU).

Which presents the possibility of another delicious twist of irony. There was a meeting last night in Newbridge to set up a new credit union, and the ILCU has offered to advise its organisers. But what if the NCU directors succeed in court, and Newbridge ends up with two credit unions linked to two rival bodies?

The bills keep on mounting for Lowry
The bills are piling up for North Tipperary independent deputy and businessman Michael Lowry.

Last week a judgment was issued against him in favour of his long-time accountants, BBT, of Foxrock, Dublin, and the Moriarty Tribunal issued a costs order in which it refused Lowry approximately two-thirds of the €8 million in legal costs he was seeking.

The redoubtable deputy is appealing both decisions in the High Court, moves that will add to his bills should he lose.

Now abridged accounts just filed for one of his companies, Abbeygreen Consulting Ltd, show that it made a loss in 2012 of €77,535, having recorded a profit of €2,308 the previous year.

The directors, Lowry and his son Jonathan, have indicated their willingness to provide support to the business if necessary, according to the accounts. During the year the company received consultancy fees of €40,650 from Lowry’s refrigeration business, Garuda.

The Abbeygreen accounts are audited by Ecovis BBT, a new accountancy firm based in the same Foxrock offices as the old BBT. In June of last year BBT, as it was then known, resigned as auditors of Garuda after the company decided to avail of audit exemption rights.

A partner in BBT, Denis O’Connor, was heavily involved in Mr Lowry’s dealings with the Moriarty Tribunal and filed an affidavit in court on behalf of BBT last week seeking judgment in relation to fees of €1.7 million, mostly arising from the work with the tribunal. An order for €650,000 plus VAT was granted, on which a stay of execution exists, with the remainder of the bill yet to be ruled on.

O’Connor, who came in for some harsh criticism in the tribunal’s final report, said Lowry had paid €260,818 from an overall bill of €2 million. During the summer Lowry’s home was raided by the Revenue, as was an unidentified business premises in Dublin. What was behind the raids has not been disclosed by Lowry. Some years ago Lowry and Garuda made a €1.45 million settlement with the Revenue. In the late 1990s he was formally cautioned by the Revenue, though he was never charged.