Belfast Briefing: skills shortage in North is not being properly addressed 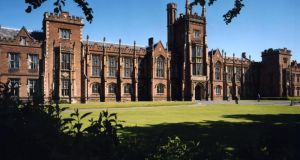 Queen’s University Belfast: Chris Caldwell believes Northern Ireland needs to direct more investment into the education system to produce graduates with the right types of skills for industry and business.

Unemployed graduates in the North will get a chance to apply this week for a place at a contemporary pop-up style academy that promises the prospect of a job with one of the world’s biggest financial and professional services companies.

There are only 14 places up for grabs but for successful applicants, it could mean the difference between signing on for unemployment benefits again or a potentially life-changing career opportunity.

Just ask any one of the 25 graduates who took participated in the PricewaterhouseCoopers (PwC) Analytics Training Academy last year if was worth it and the fact they all got a job at the end of it speaks for itself.

This pop-up style academy – which runs for just eight weeks – has come about thanks to a successful partnership between the Department for Employment and Learning, PwC and the Belfast Metropolitan College.

According to the North’s Minister for Employment and Learning, Dr Stephen Farry, who officially launched the second year of the academy in Belfast yesterday, it highlights the importance of equipping not just graduates but anyone who is looking for a job with the skills that employers want.

PwC is in the process of rolling out a £40 million investment programme in Northern Ireland that is expected to create 807 jobs.

Recruiting talent Paul Terrington, the firm’s regional chairman, says that as one of the region’s largest graduate employers, it is constantly looking to recruit talent – the Analytics Training Academy is just one way it does this.

PwC is not the only global organisation on the lookout for new talent in the North. In fact, a number of major employers, especially inward investors, are expanding their local operations, particularly in Belfast, and are keen to woo new staff.

The only problem, according to some, is that there is a distinct skills shortage in Northern Ireland that is not being addressed.

Chris Caldwell, the president of Concentrix Corporation, which employs 1,800 people locally, recently praised the North’s “fantastic labour pool”, although he warned that “the depth of the pool was not quite what we were hoping for”.

Caldwell believes Northern Ireland needs to direct more investment into the education system to produce graduates with the right types of skills for industry and business.

It is a message that Bro McFerran, the vice president at Allstate NI which employs more than 2,200 people, has been preaching for a while.

This month, for example, Allstate is launching a major recruitment drive in Madrid and Bucharest to try and fill 40 positions in the North.

Like every other government department in the North, the Department for Employment and Learning is battling with budgets. It could be potentially looking at cuts across the board of £104 million in respect of its 2015-16 budget.

Initiatives like the training academies are funded by the department through its Assured Skills programme – it is the stated objective of this programme to “attract high-value, highly paid jobs to Northern Ireland and achieve the Executive’s targets on productivity and wealth generation”.

However, like every other programme that it funds, this could be under threat.

The department says the Assured Skills programme is a “key selling point used by Invest NI in its offer of support to potential foreign direct investment companies”.

FDI projects The department says there are 16 foreign direct investment Assured Skills projects with signed letters of offer supporting the potential creation of 4,086 jobs with a departmental commitment of £6.3 million.

It also details a number of other projects in the pipeline.

When all the jobs are created, it adds, they will be worth an additional £113 million a year to the North’s economy.

Yet the department could still face budget cuts which could prevent it from helping to deliver these jobs for the North – somehow that does not quite add up.