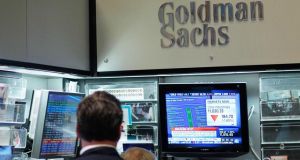 Goldman Sachs, Deutsche Bank and Morgan Stanley have held talks with one of China’s biggest bad banks about investing in its $1.5 billion stake sale ahead of a planned Hong Kong listing next year, according to people close to the process.

The move is one sign that the Chinese government will not entirely bail out the next round of problem loans emerging from China’s credit boom, but will instead rely more on market- driven remedies. The capital raising by state-owned Hua- rong is expected ahead of an initial public offering of its larger bad bank cousin, Cinda, later this year.

Goldman Sachs is leading the race to take the lion’s share of the stake in Huarong, according to two people close to the deal. However, another banker with knowledge of the process said a deal was not expected until December. The three banks declined to comment or could not be reached, while Huarong declined to comment.

Huarong and Cinda are two of four asset-management companies set up by the Chinese government in 1998 to take on Rmb1.4 trillion ($229 billion) of non-performing loans from the country’s four biggest banks.

Huarong bought bad loans from Industrial and Commercial Bank of China, while Cinda bought debts from China Construction Bank. The four bad loan managers were loss-making for many years, but since the huge stimulus programme launched by China in 2008, they have converted many old debts into equity stakes and made attractive returns. – Copyright the Financial Times Limited 2013

1 Who are Ireland’s 17 billionaires?
2 My father in a nursing home wants to gift me his house
3 Countries that fail to attract immigrants will lose out – Microsoft chief
4 Are there annual limits on inheritances or gifts to a child?
5 How to . . . move (almost) everything to your new phone
6 Apple’s secretive Cork facility opens up – to an extent
7 Davos Diary: Chilly reception for Trump’s ‘prophets of doom’ speech
8 Nama lends Cosgraves €15m to fund huge apartment development
9 O’Flynn company ‘mistakenly’ got go-ahead for Birmingham project
10 Dublin office vacancy rate hits lowest level in 20 years
Real news has value SUBSCRIBE