BDO’s Boys in Green get set

Kevin Reid is a Scot but he has declared for Ireland, which would make him the firm’s version of Aiden McGeady 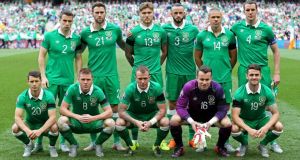 The Ireland football team continues to dole out nothing but heartbreak and misery for supporters but at least we still have our accountants to keep the competitive blood pumping. I know, I know... But it’s better than nothing, isn’t it?

A team from BDO Ireland, the well-known advisory firm, sets off for Prague today to compete in an annual five-a-side football tournament of the international BDO network.

Ciaran Medlar, who heads up BDO Ireland’s growing sports star advisory practice, is unable to make the tournament. I’m sure they’ll find another ball-kicking bean counter to make up the team.

Reid is a Scot but he has declared for Ireland, which would make him the firm’s version of Aiden McGeady.

His father is John Reid, a former Labour secretary of state for Northern Ireland among other cabinet posts during Tony Blair’s period of office. Reid senior was also Celtic chairman, which is justification enough for the bairn to declare for the Boys in Green.

More than 40 teams compete in the tournament. Ireland’s group opponents this year are Bulgaria, Norway and France, who I hear handle all client matters sensitively. I wonder if Thierry Henry is on their books?

The Irish team was knocked out of the tournament last year on penalties by the old enemy. No, not Grant Thornton. The BDO team from England did the deed.

1 High Court appoints interim examiner to Compu b parent company
2 Brexit: System agreed for Irish goods to skip checks on UK trade
3 Second Covid-19 outbreak and no-deal Brexit an appalling vista
4 How much do Irish people earn? And what will Covid-19 do to our wages?
5 Why are markets booming when a crash is on the way?
6 David McCullagh announced as co-host of RTÉ Six One News
7 ‘The rental situation stops me moving back home’
8 Ireland faces 'deep downturn' this year and may not rebound until 2024 if there is a second wave
9 Red tape logjam creates fear for Irish timber supply
10 Former Worldspreads chief Conor Foley faces €730,000 fine
Real news has value SUBSCRIBE