Banking inquiry: Liquidating Irish bank was ‘not an option’ 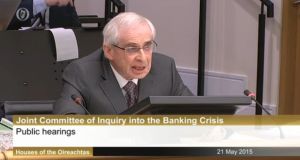 Liquidating one of the Irish banks was “not an option” on the night of the bank guarantee in September 29th 2008, the former Central Bank of Ireland governor John Hurley told the Oireachtas Banking Inquiry today.

“I would not have advised any government to take that risk,” Mr Hurley said, adding that other options were discussed, including nationalisation. “You were not going to take such a risk with the economy.”

In evidence given to the inquiry in January, the current governor Patrick Honohan, said Anglo Irish Bank and Irish Nationwide should have been liquidated by the State. “I don’t agree that liquidation was an option,” was Mr Hurley’s response to this proposition.

On whether Anglo Irish Bank should have been nationalised, Mr Hurley said: “It was not at all clear that nationalising Anglo would not have as big a contagion effect (on other Irish banks) as a default,” he said.

Mr Hurley said Anglo was illiquid on the night of the guarantee but not insolvent and nationalising the bank while providing a guarantee to the other domestic banks could have exposed the State to claims from various stakeholders in Anglo who would have been wiped out.

“I formed a judgment that night that nationalising Anglo would have complicated the situation not eased it,” he said.

On whether the decision to include Anglo in the guarantee was the correct one, Mr Hurley said: “There was no option on the night. That was the best option to be taken. If the decision had not been taken there would have been serious consequences for Ireland. ”

Mr Hurley said the Central Bank did not discuss the specifics of Ireland’s bank guarantee with the European Central Bank in advance of the decision being made.

“There was no specific pre-dialogue on specific options,” Mr Hurley told Fine Gael deputy John Paul Phelan. “But there would have been an understanding (by the ECB) of the broad options being considered.”

Inside Business: The Banking Inquiry, Brexit

Mr Hurley said the Central Bank was well aware of the liquidity problems facing Anglo in the period leading up to the guarantee in September 2008.

“We had a very good picture of the liquidity position in Anglo Irish Bank,” he said. “We knew exactly what the state of play was. We knew of the potential for a problem on the following morning (September 30th 2008).”

He said arrangements had been made to ensure that there would be no default on the day after the guarantee decision and there was no prospect of one of the Irish banks being unable to open for business.

In relation to the night of the guarantee, Mr Hurley said he arrived at Government Buildings at about 6.30pm. A meeting chaired by the then taoiseach Brian Cowen kicked off at 7pm to discuss liquidity issues in the system.

Mr Hurley said that over the previous weekend, the Central Bank had been confident that the Irish banks would get through the week. “That changed on Monday. We knew we were in a critical situation.”

Mr Hurley said a presentation was given by Dermot Gleeson, the then chairman of AIB, and that either Mr Gleeson or AIB’s former chief executive Eugene Sheehy spoke about a four bank guarantee, which would have covered AIB, Bank of Ireland, EBS and Irish Life & Permanent.

His interpretation is that they sought a broad guarantee, covering all categories of debt, including subordinated debt.

Mr Hurley said he would not normally have included such debt in a guarantee. However, such was the potential “crossover” of debt that he felt it was right for it to be included so as to present a “coherent” position to markets the following morning (September 30th 2008).

Mr Hurley recalls the issue of nationalisation being discussed but does not remember legislation to give effect to this being brought up on the night.

Mr Hurley said the message around that time coming from the EU and the ECB was that Europe must not have “another Lehman Brothers” and that countries had to stand behind their banks.

“There was really no doubt about this across Europe,” he said.

The former Central Bank governor said that the issue of a guarantee was first discussed at a meeting on September 18th, but Mr Hurley thought at the time that it would be “counter productive”.

Subsequent events prompted him to change his view.

Mr Hurley said it is his understanding that AIB and Bank of Ireland were appraised of the Government’s decision to issue a blanket guarantee on leaving Government Buildings that night. This conflicts with evidence give by Mr Gleeson and Mr Sheehy.

Mr Hurley had no recollection of anyone being overruled by the taoiseach Brian Cowen on the night of the guarantee.

Mr Honohan’s evidence in January had suggested that the Minister for Finance Brian Lenihan wanted to nationalise Anglo and Irish Nationwide and did not want to include subordinated debt in the guarantee but was overruled by a more senior politician in the room.