Fine Gael’s golf classics were not the same as Fianna Fáil’s Galway Tent, says the Taoiseach 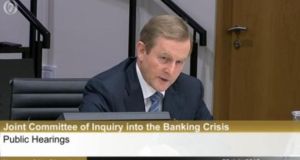 Fine Gael was not the same as Fianna Fáil in 2007 even though they both accepted same figures for the then Budget.

5 things we learned from Enda Kenny’s appearance at banking inquiry:

1. Fine Gael’s golf classics were not the same as Fianna Fáil’s Galway Tent.

“I would say if anybody wished to participate or contribute in a Fine Gael golf classic, which no longer applies, or whatever, it certainly had no bearing, from our party’s point of view, on any particular interest that they might have.

“I suppose, in any democracy, people are entitled to support who they wish but let me assure you that in so far as the Fine Gael party was concerned, the relationships that you referred to did not apply and anybody who participated in a golf match or whatever, I’m not sure how they played.”

2. He had a conversation with the chief financial officer of Anglo Irish Bank Matt Moran in November 2008 but there was no conversation of substance.

“I was asked to make a call to him, that he had wanted to say something to me, or so I was led to believe. He didn’t say anything to me of any substance about any banks. And I gave ... I would have given no information whatsoever because I wouldn’t be in a position to have that information.”

3. He attended a board meeting in Anglo Irish Bank headquarters in 2008.

“The purpose of the meeting was to have a discussion about the general economic situation and to enquire about the healthy state, or otherwise, of the banks. And that’s why I said that, in the case of Anglo Irish, a presentation was given that was to the point that Anglo was a model of a bank that would emerge from the recession as the strongest of any bank.”

4. Enda Kenny never looked for a lift from a developer.

“I have never gone round asking property developers for a lift. I have never sought hospitality or transport from a developer.”

5. Fine Gael was not the same as Fianna Fáil in 2007 even though they both accepted same figures for the then Budget.

“The Fine Gael economic model was vastly different from what Fianna Fáil had proposed and were implementing. And your comment that this was the same as the Fianna Fáil Party is just not consistent with reality because we had consistently, from 2002 onwards, pointed out the dangers to the economy, the necessity for having accountability, regulation, value for money, efficiency, competence in running a national economy and that was not in any way evident in what the Government of the day were at.”

1 Wetherspoon’s panto-villain chairman may have the last laugh
2 British exceptionalism backfires in style as Johnson tests positive for coronavirus
3 UK needs to be honest about its Covid-19 strategy
4 Will Covid-19 force Primark to rethink decision not to sell online?
5 Volkswagen burning through €2bn in cash per week
6 Usit travel group in liquidation due to coronavirus crisis
7 Remote working doesn’t suit everyone, and it exposes woolly leadership
8 Rivian takes on Tesla with big batteries and subtler approach
9 ESB paying exchequer €88m dividend a pointless exercise
10 ECB orders banks to freeze dividends and share buybacks
Real news has value SUBSCRIBE