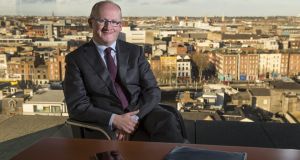 His comments come as Irish insurers face the cost of the collapse of Malta-regulated Setanta Insurance.

“The coordination of national protection schemes for policyholders remains unsatisfactory,” he said. “Should an insurance firm fail, citizens are covered in full, in part or not at all, depending on where they are and where their insurers are regulated.”

While Mr Lane did not name Setanta, the High Court last year ordered the Motor Insurance Bureau of Ireland to cover €90 million of claims against the insurer, which sold policies exclusively in Ireland before it collapsed in 2014.

The High Court order is currently under appeal with the Supreme Court.

“I can only encourage Eiopa to press on this issue and ensure that firms that would not be authorised in one country do not find a home in another,” he said.

The Central Bank governor also warned that life and general insurers should not seek to compensate for current low returns in their main business by investing in riskier assets.

“Excessive risk-taking by insurance firms can be a source of financial instability, both directly and indirectly through the interconnections between the insurance sector, other financial intermediaries and financial markets,” he said.

Mr Lane said there is “clearly a challenge” for life insurers, such as those who have traditionally included guaranteed returns to policy holders, amid a protracted low interest rate environment.

General insurers, who have largely been loss-making in recent years in Ireland amid soaring claims costs, should also avoid getting into riskier assets and instead focus on an “appropriate return from core underwriting activity”, he said.