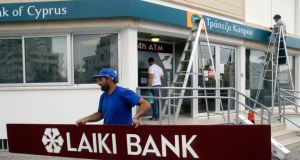 
Deposits of over €100,000 are likely to be hit in the event of future European bank collapses, according to a proposal put forward by the Irish presidency of the European Council ahead of a key meeting of finance ministers next week.

Discussions on the controversial bank resolution regime, which is likely to see savers with deposits over €100,000 “bailed in” as part of future bank wind-downs, are due to intensify this week in Brussels, ahead of Tuesday’s meeting, which will be chaired by Minister for Finance, Michael Noonan.

“We will try to get some guidance from Ministers about the possible design of the bailout tool,” one EU official said yesterday.

Under a compromise text proposed by the Irish presidency, uninsured deposits of over €100,000 would be bailed in in the event that a bank is resolved, but depositors would rank higher than other creditors in the event of a wind-down.

In this scenario – known as “deposit preference” – depositors would rank at the very end of the process, with other creditors first absorbing losses.

However, some member states have not ruled out the possibility that insured deposits, i.e. deposits under €100,000, would be forced to bear losses in the event of a bank collapse even though these deposits would be likely to be protected by the deposit guarantee scheme.

However, the explicit exclusion of insured deposits from future “bail-ins” could in fact be included in the final text, according to some sources, with some MEPs in particular keen to include such a provision.

Significant differences still remain between states on the issue, with some countries calling for greater flexibility as regards the application of the new rules on a national basis, including the possibility that individual countries could be permitted to exempt large depositors from losses if a bank fails.

The introduction of an EU-wide bank resolution process, which would govern how banks are wound down, is a key strand of the EU’s plan for a pan-European banking union, which was endorsed by EU leaders at last June’s summit.

However, the chaotic Cyprus bailout instilled the issue with greater urgency, with EU lawmakers now keen to provide clarity around bank collapses.

Moving the burden
This year Jeroen Dijsselbloem, head of the group of 17 euro zone finance ministers, said that losses on bondholders and depositors could form part of future bank bailouts as euro zone officials seek to move the burden of bailouts away from taxpayers – as was the case in the Irish bailout – and on to private investors.

The European Commission argues that this switch from so-called “bailouts” to “bail-ins” would result in an allocation of losses that would not be worse than the losses that shareholders and creditors would have suffered in regular insolvency proceedings that apply to other private companies.

While the new rules governing bank resolution were first intended to come into place in 2018, since the Cypriot bailout there have been calls from senior EU figures such as European Central Bank president Mario Draghi and EU economics affairs commissioner Olli Rehn to introduce the new regime as early as 2015.

The Irish presidency of the European Council is hoping to reach a common position by the end of next month.