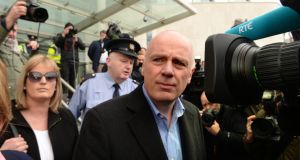 The conviction of former Anglo Irish Bank chief executive David Drumm and his colleagues show there is both the “appetite and capability” on the part of the Office of the Director of Corporate Enforcement (ODCE) to tackle serious criminal wrongdoing, the regulator has said.

The ODCE issued a statement on Friday, following Drumm’s guilty plea at Dublin Circuit Criminal Court to providing unlawful loans to 10 businessmen known as the “Maple 10” in July 2008.

The former bank chief pleaded guilty to authorising or permitting illegal loans to be given to 10 businessmen in 2008 to buy shares in the bank.

Drumm (51) of Skerries, Co Dublin was transferred to Dublin Circuit Criminal Court on Friday from Mountjoy Prison, where he is currently serving a six-year sentence for conspiracy to defraud and false accounting.

Wearing a white polo T-shirt and blue jeans, Drumm stood in the dock and replied “guilty” to 10 charges of providing the loans to the Maple 10 group of developers and businessmen.

He had been due to face trial in October but this has now been cancelled. Paul O’Higgins SC, prosecuting, said the State intended to withdraw the remaining 21 charges listed on the indictment against Drumm. This decision means that his trial, which was scheduled for October, will not go ahead and there are no further criminal proceedings pending against former directors or employees of Anglo Irish Bank.

Six of the charges to be dropped relate to allegations that Drumm had authorised or permitted Anglo to give illegal loans for the purpose of buying bank shares to the wife and five children of former billionaire businessman Seán Quinn. A further 14 charges that no longer apply alleged that Drumm used false instruments and falsified documents regarding letters about the illegal share support scheme to Messrs O’Farrell, McKillan, Maguire, Kearney, O’Reilly, Ross and Reilly.

The final charge to be withdrawn accused Drumm of breaching an EU transparency directive on May 7th, 2008, by publishing an interim management report that failed to disclose Anglo’s substantial exposure to a large contracts for difference position built up by Mr Quinn.

Drumm was jailed last week after a jury returned unanimous verdicts of guilty on a charge of conspiracy to defraud and false accounting, following an 87-day trial. In this latest case, Judge Karen O’Connor remanded him in continuing custody for sentence on July 9th.

The ODCE said the hearing brought to a conclusion its “decade-long involvement” in matters connected with the former Anglo Irish Bank Corporation plc.

There are now no further criminal proceedings pending against former directors or employees of Anglo Irish Bank.

The ODCE said the convictions of Drumm and former Anglo Irish Bank executives William McAteer and Patrick Whelan show “there is both the appetite and the capability on the part of the ODCE to tackle serious criminal wrongdoing”.

In relation to the acquittal of former chairman of Anglo Irish Bank Seán Fitzpatrick last year, the ODCE acknowledged that the judge had highlighted certain failures in the underlying investigation and subsequent prosecution.

“In so far as such failures related to the actions of the ODCE, steps have been taken to ensure that they do not recur,” it said.

Mr Fitzpatrick faced 27 charges of making a misleading, false or deceptive statement to auditors and furnishing false information between 2002 and 2007.

Judge John Aylmer said the ODCE had adopted an “inappropriate, biased and partisan” approach. It was trying to “build and defend” a case against Mr Fitzpatrick rather than investigate the alleged crimes, he said.

Further complexity is brought to bear by the fact that many such offences have never been prosecuted previously and therefore raise “novel issues” for investigators, prosecutors and the courts, it said.

The ODCE added that it is not unusual for all witnesses and other relevant persons to have legal representation which makes it “highly challenging to investigate and prosecute”.

It said Anglo-related activities have over the last decade “been enormously resource intensive”.