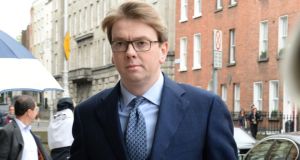 Matt Moran, former chief financial officer of Anglo Irish Bank: he said when it became known that Irish Life & Permanent had recorded transactions in their accounts as netted some of his colleagues were “very annoyed”. Photograph: Dara Mac Donaill / The Irish Times

The main auditor of Anglo Irish Bank was uncomfortable and concerned in February 2009 about an allegedly circular billion-euro transaction between Anglo and Irish Life & Permanent.

Four former senior bankers from the two banks are accused of conspiring to mislead investors by setting up a €7.2 billion circular transaction scheme to bolster Anglo’s balance sheet in 2008.

Peter Fitzpatrick (63) of Convent Lane, Portmarnock, Dublin, John Bowe (52) from Glasnevin, Dublin, Willie McAteer (65) of Greenrath, Tipperary Town, Co Tipperary and Denis Casey (56), from Raheny, Dublin have all pleaded not guilty at Dublin Circuit Criminal Court to conspiring together and with others to mislead investors through financial transactions between March 1st and September 30th, 2008.

Anglo’s then chief financial officer Matt Moran said when it later became known that ILP had recorded the transactions in their accounts as netted some of his colleagues were “very annoyed”.

The jury previously heard that Kevin Cardiff, secretary general in the Department of Finance, later contacted ILP “inquiring about the accounting treatment for the transaction”.

In the email Mr Bergin wrote: “I am increasingly concerned abut this transaction. We discovered last evening that contrary to everything we have heard up to now the ILP transactions were actually netted and setted, despite there being three counterparties.

“ILP, as you know, claim the cash was cash ‘collateral’.”

Mr Bergin said the auditors needed “chapter and verse on this. I think that Finance [in Anglo] are relying on assurances from other people and these assurances are falling away. We need audit evidence to support the fact that there was no set-off agreement. Whether this is written deal confirmation or tape transcripts I am not sure but at the moment I am feeling very uncomfortable.”