China experienced its first ever corporate debt default this month 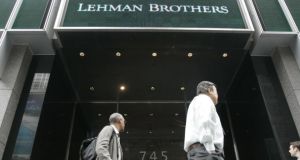 Worries that China is facing a “Lehman-style” financial crisis have been dismissed. Photograph: Mary Altaffer/AP

One of the more startling headlines in our inbox this week was “Why China is not facing a Lehman moment” atop a piece of research by UBS analyst Wang Tao.

China experienced its first ever corporate debt default this month, when a Shanghai-based solar energy company, Chaori, said it could not make bond interest payments of 89.8 million yuan.

There followed others – a Zhejiang property developer who could not repay hundreds of millions of euro worth of loans, then a bank in Jiangsu province.

The revelations prompted fears of a nightmare scenario where defaults in the shadow banking sector unleash a chain reaction and a sudden mass unwind of all other shadow banking products.

The Chinese government’s reaction was remarkable forthright, and it seems Beijing sees this as a learning curve for Chinese corporates, especially state firms.

Premier Li Keqiang said isolated cases of default are unavoidable, and his remarks were followed by similar comments since from other senior officials. In other words, people are worried that China may soon face a “Lehman-style” financial crisis, said Wang.

“As more trust and WMP products mature and as the economy slows this year, the number of payment issues and defaults hitting headlines will inevitably rise. However, a systemic financial crisis is not in sight,” she wrote.

“This is not only because of the government’s strong fiscal capacity, the banking system’s ample domestic funding, and state ownership interest in banks, but also because of fundamental differences between the defaults facing China today versus those facing the US bank- ing system a few years ago.”

Basically, it now appears that some of China’s struggling firms are being told “no” by banks for the first time, or receiving smaller and costlier loans. And this includes state-owned companies, long the darlings of the lenders because of their government connections.