AIB on track to meet pre-provision operating profit in 2013 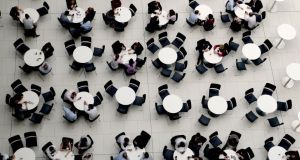 Allied Irish Banks has posted an improvement in its overall operating performance in the first three months of 2013.

The bank reported that product repricing has helped boost its net interest margin in the first quarter and is expected to benefit operating income for the rest of the year.

Cost cutting has also helped improve margins as staff costs and other expenses have been reduced.

Ninety-five per cent of its non-core deleveraging for 2013, of €19.6 billion, was completed in the first three months of the year.

The bank is on target to meet its target of pre-provision operating profit this year as its loan portfolio is in line with expectations and bad debts are expected to be lower than levels reported in 2012.

Goodbody analyst Eamonn Hughes said, “This is quite a positive statement from AIB with continued progression on the margin, growth in deposits and lower costs further evidence the bank is beginning to stabilise.

“In terms of read through for Bank of Ireland, margin improvement, significantly lower bad debt trends and deposit momentum are trends likely to be replicated across the wider banking sector. We expect to leave our forecasts unchanged.”

1 Aldi empire wracked by family feud
2 Will PTSB be Ulster Bank’s knight in shining armour?
3 TikTok to be banned from US app stores from Sunday
4 NatWest considers closing Ulster Bank in the Republic
5 Cliff Taylor: What permanently low interest rates mean for you as a saver or borrower
6 Ulster Bank CEO tells staff ‘all options’ on future on the table
7 ‘INM 19’ members win High Court applications for document access
8 How Ireland managed to green the White House
9 EU signals late call on Apple tax appeal as deadline looms
10 Gabriel Makhlouf: ‘A full second lockdown would be very serious for the economy’
Real news has value SUBSCRIBE