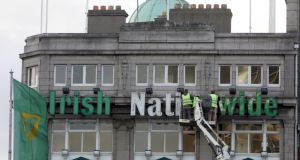 AIB and Bank of Ireland could end up going head-to-head for a €250 million book of former Irish Nationwide residential mortgages.

The Irish Times has learned that both Irish banks have expressed an interest in acquiring the portfolio of performing home loans that is being sold by the joint liquidators of Irish Bank Resolution Corporation.

It is understood that Rockstead Ireland, a specialist loan valuation group led by former Permanent TSB executive David Guinane, has carried out due diligence on the portfolio for AIB, and the bank is now expected to lodge a bid with IBRC’s liquidators, Kieran Wallace and Eamonn Richardson.

Bank of Ireland is also known to have run the rule over the portfolio, although it is less clear if it will follow through with a formal bid.

Five parties are thought to have engaged with the process. Dilosk, an Irish financial services group that recently bought the ICS Mortgages brand from Bank of Ireland, is believed to have shown an interest in the portfolio, although it is not expected to proceed with a offer.

Such is the quality of the loan book that sources have indicated that the sale could achieve a premium on the €250 million par value of the book.

According to informed sources, the portfolio comprises about 5,000 loans with around 3,000 customers.

The process for the performing loan book is thought to be at the second phase of bidding.

The loans are former Irish Nationwide residential mortgages and are part of €2.5 billion in residual assets that the liquidators did not sell earlier this year, when 90 per cent of IBRC’s €21.7 billion loans were transacted via various portfolio sales.

This followed the decision by the State to liquidate IBRC in February 2013.

In March, the liquidators sold 64 per cent of IBRC’s €1.8 billion mortgage book as part of Project Sand. The mortgages were 74 per cent owner-occupied and 26 per cent buy-to- let and amounted to 12,778 loans.

No comment was available last night from AIB, Bank of Ireland or the liquidators of IBRC.

Both AIB and Bank of Ireland are keen to rebuild their loan books, which have been in decline in recent years due to asset disposals of their own and redemptions by customers exceeding new mortgage loan activity.

Acquiring a mature, performing loan book such as the IBRC portfolio would fit with this strategy.

Separately, it emerged yesterday that AIB has provided a €23.4 million facility to UK company Development Securities plc for the acquisition of a site in Malahide.

This was revealed by the UK property group in its interim results.

In July, Development Securities acquired the freehold interest in 85 residential units and a nine-acre site in Malahide for €36 million.

The units are 98 per cent let, generating a net yield of 5.5 per cent, while the development site benefits from planning permission for 154 units.