Eyeing DNA as a way of ensuring art’s authenticity 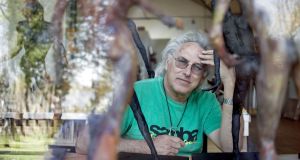 The artist Eric Fischl remembers the time a friend waved a catalogue at him to alert him that one of his paintings was up for auction for six figures in London. In reality, the work was a fake, but so convincing, Fischl said, that “I thought I was losing my mind”.

Brushes with forgery like that one two decades ago, and concerns about his legacy and estate, prompted Fischl to appear in London this month to vouch for a new authentication system that would enable artists to sign their works with specks of synthetic DNA.

The method is being developed at the Global Centre for Innovation, part of the State University of New York in Albany. The school said it had received $2 million (€1.76 million) in funding from Aris Title Insurance, which specialises in art.

Two years ago, the centre, known for its work in bioengineering, encryption and nanotechnology, set about developing a way to infuse paintings, sculptures and other artworks with complex molecules of DNA created in the lab.

“We wanted a marker that was very hard to locate and not prone to environmental issues or tampering,” says Robert J Jones, president of the university. Equally important, he adds, was that artists would embrace the approach.

Experts say fakes have become one of the most vexing problems in the art market. Scandals such as the one involving dozens of forgeries sold through the venerable Knoedler Gallery in Manhattan, before it closed in 2011, are sapping the confidence of buyers, owners and artists.

An objective way of marking art would be particularly attractive at a time when reliance on subjective expertise, or connoisseurship, and often incomplete provenance seems to be waning. Curators, artists’ foundations and independent experts now often shy away from authenticating works, for fear of being sued.

“There is a deep freeze in authentications,” says Colette Loll, of Art Fraud Insights, who was a consultant on the Albany project.

The developers say the bioengineered DNA would be unique to each item and provide an encrypted link between the art and a database that would hold the consensus of authoritative information about the work. The DNA details could be read by a scanner available to anyone in the art industry wanting to verify an object.

Those trying to create the new standard say they have signed up three dozen internationally recognised artists, archives, foundations and museums who want to test the technology, which could be ready as early as next year.

Artists and owners would buy a kind of tag that they could use to apply the DNA. Early estimates by the developers say tags would cost about $150. Once applied, the DNA would penetrate the work at the molecular level, so removing the tag would not eliminate an item’s forensic signature.

“We see it as a secure, safe and invisible solution that artists and owners can accept,” said Lawrence M Shindell, chairman of Aris, which is based in New York. “Our goal is to remove uncertainty from the market.”

Potential buyers and sellers could also check items for DNA codes to see whether they had been stolen. Establishing this could block their resale by galleries and auctioneers and bring about their recovery, say supporters of the project.

They also say it is crucial that applying the tags has no impact on the work.

Replicating all but impossible

Jones says the State University of New York took on the task as a public service and as a possible revenue generator, though those details remain unclear. Aris says it has no ownership of the technology, but would benefit from greater transparency and confidence in a $55-billion-a-year market in which it sells insurance.

“It makes a lot of sense for us to be involved, given that the state of New York is one of the world’s largest art markets,” Jones said. “We hope there will be financial benefits from creating the intellectual property, and that the process becomes a gold standard in the industry.”

Fischl says he wants to assure fellow artists that the idea is “a no-brainer” as a wayof preventing forgeries of their work being sold. He added that “authenticating a work from the very start can alleviate the pain and frustration people go through when they think they have something of great value and they really don’t”.

“What’s not sexy about synthetic DNA?” he adds.