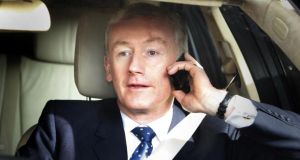 The spectre of Britain’s most reviled company boss, the former RBS chief executive Fred Goodwin, was invoked yesterday by a government minister as he delivered a stark warning to the big energy companies that they were facing a “Fred the Shred” moment.

In a combative speech delivered at the annual conference of Energy UK – the power industry’s lobby group – energy secretary Ed Davey told Britain’s leading energy bosses they could not treat their millions of customers as “cash cows” to be squeezed in pursuit of a higher return for shareholders.

While energy companies should be profitable, those profits should not be earned at the expense of “the elderly, the vulnerable and the poorest in our society”, Davey said.

He went on to warn the assembled industry executives that trust between those who supply energy and those who use it was breaking down amid fears of consumers that they were being “taken for a ride”. As household gas and electricity bills soar, consumers look at their energy suppliers “and see a reflection of the greed that consumed the banks,” Davey said.

Just as Davey was about to take the stage, another of the Big Six energy companies announced the latest inflation-busting price hike. French-owned EDF, which supplies four million homes in Britain, is to raise its prices by 3.9 per cent from January.

That is little short of double the latest inflation figure of 2.2 per cent but is significantly below price rises announced in recent weeks by its rivals – nPower is putting its prices up by 10.4 per cent, British Gas by 9.2 per cent, Scottish Power by 8.6 per cent and SSE by 8.2 per cent. The last firm to move, the German-owned E.ON, is expected to announce an increase of 6.6 per cent in the next few weeks.

Not surprisingly, the energy secretary’s speech did not go down well with his industry audience. Being compared with a disgraced banker clearly infuriated the energy lobby, which must sincerely regret having invited Davey along at all yesterday, let alone to give the keynote speech. It accused him of engaging in a tit-for-tat “Punch and Judy” show of insults, saying the industry was working hard to ensure that “everyone can keep the lights on and stay warm this winter”.

The energy executives may have been shocked at being publicly branded as greedy as bankers, but it must all have sounded very familiar to one person in the conference room – Energy UK’s chief executive, Angela Knight. Before she joined the lobby group she was chief executive of the British Bankers’ Association, the trade body of the banking industry, and spent many years defending the indefensible.

The joke doing the rounds in the City yesterday was that Knight’s next career move would be as ambassador to the payday loans industry.

Bankers’ greed
Energy companies may be giving bankers a run for their money in terms of public opprobrium, but bankers still have the edge when it comes to greed. Royal Bank of Scotland chairman Sir Philip Hampton gave an insight into the pressures of being badgered by bankers demanding ever-higher bonuses. Speaking at a debate on performance-related pay earlier this week, the RBS boss detailed an angry encounter with one un-named banker over a potential £4 million pay package.

Likening it to “an out-of- body experience”, Hampton described the “outrage coming across the table from the other side because they know that somebody doing a comparable job at another bank is getting £6 million.

“That is absolutely outrageous to them, that somebody is getting 50 per cent more,” he said.

Hampton said it illustrated “part of the different world that can be inhabited”. But it’s come to something when even a banker is aghast at the demands of other bankers.