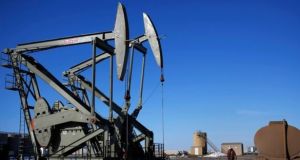 Tullow said oil production at the field was continuing as normal

Tullow Oil’s shares slumped more than 11 per cent on Thursday on fears that a technical problem could hit production at its flagship Jubilee Field off the coast of Ghana.

Tullow said there was a potential issue with a storage vessel at its flagship Jubilee field in Ghana, sending shares down 11.5 per cent to 169 pence sterling in London, shortly ahead of the close.

The company, which is expecting a second field in Ghana to begin production this year, said it had taken additional measures to monitor part of a turret bearing on the vessel that collects and stores the oil produced from the field.

“The implications are that the turret may require maintenance that results in an unscheduled shut-in,” RBC Capital Markets analysts wrote in a note to clients.

RBC expects Jubilee to contribute nearly half of the company’s production in the first half.

The company said it was working with the original manufacturer of the bearing, and that oil production at the field was continuing as normal.

Shares in the company were down 7.4 per cent at 177.2 pence on the London Stock Exchange in early trading, making them the largest losers on the FTSE mid-250 Index.