Tullow Oil shares rise ahead of talks on global oversupply 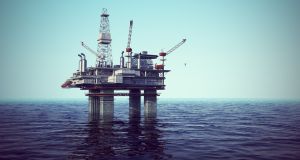 Rigging the market: The price of Brent crude oil rallied on Tuesday to $44.70 a barrel, its highest level this year, on reports that Saudi Arabia and Russia had struck a deal on production restrictions. Photograph: Getty/iStockphoto

a meeting of oil superpowers this weekend may result in a production freeze in a global market dogged by oversupply.

The company’s stock jumped 14.4 per cent to €2.80 in Dublin, its biggest advance in six weeks, having advanced almost 6 per cent in the previous session. Thirteen members of the Organisation of the Petroleum Exporting Countries in addition to Russia, Mexico and five other non-Opec countries assemble in Doha on Saturday where they will consider freezing output to shore up prices.

The price of Brent crude oil rallied on Tuesday to $44.70 a barrel, its highest level this year, on reports that Saudi Arabia and Russia had struck a deal on production restrictions. However, it eased back 0.7 per cent to $44.38 in London yesterday as Saudi oil minister Ali al-Naimi appeared to play down the prospects of it agreeing to such a move.

“The data shows that we’re still oversupplied,” said Adam Wise, who helps run a $7 billion oil and natural gas bond and private equity portfolio at John Hancock in Boston. “The market should remain volatile as we approach the Doha meeting. A freeze would take place in a very oversupplied market.”

Iranian oil minister Bijan Zanganeh does not plan to attend the Doha meeting, but Iran will send a representative. Iran has said it does not plan to participate in any output cap agreement after sanctions against it were recently lifted.

The more positive tone on global oil markets this week has taken the focus off production delays at Tullow’s flagship field off the shore of Ghana. The company, which said in mid-February it had discovered a technical issue involving a turret bearing at a production vessel at the field, said on Friday that output would take a further two weeks to restart and it would take time to ramp up again. – (Additional reporting, Bloomberg)