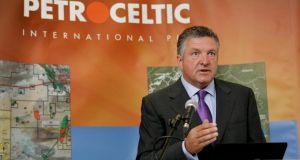 Petroceltic International chief executive Brian O’Cathain. The Dublin-based explorer has said the Algerian state oil company, Sonatrach, is to increase its stake in the Asarene licence in Algeria.

The commercial terms and proceeds of pre-emption are similar to those agreed between the company and a potential third party purchaser, Petroceltic said.

Following the completion of the transaction, Sonatrach will hold a 43.375 per cent participating interest, Petroceltic will hold 38.25 per cent and Enel will hold the remaining 18.375 per cent.

He said the company believes this decision represents a positive endorsement of the technical, commercial and development work undertaken between the two companies over the last nine years.

Davy Stockbrokers said the pre-emption by Sonatrach, of the sale of an 18.375 per cent stake in the Ain Tsila gas development sends an important message about its value.

“The involvement of the state company also points to the quality, potential longevity and the role the field will play in the next generation of gas projects required to meet domestic and international demand for Algerian gas.”

Petroceltic said the deal is not expected to have any impact on the overall timing for the awarding of major contracts or the starting of detailed development activities.

The oil and gas exploration company, which is focused on North Africa, the Mediterranean and Black Sea regions, has production, exploration and development assets in a number of countries including Algeria, Bulgaria, Italy and Romania.

1 Boris Johnson's new immigration regime will damage much more than industry
2 Bank leaked my loan request to family who tried to rip me off
3 Mastercard to create 1,200 new jobs by expanding base in Dublin
4 Varadkar resigns amid warning impasse will hit the economy
5 Garda mobile contract win causes concern over Eir’s use of Huawei kit
6 Google completes purchase of Treasury Building for €120m
7 Billionaire Zara founder and German funds vie for prime Dublin offices
8 AIB lines up former HSBC executive McDonagh as chairman
9 Brendan O’Connor is back in the RTÉ big league
10 When I’m 65: five ways you’ll benefit
Real news has value SUBSCRIBE