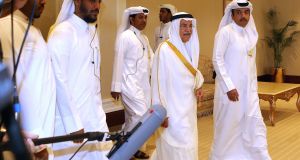 A deal to freeze oil output by Opec and non-Opec producers fell apart yesterday after Saudi Arabia demanded that Iran join in despite calls on Riyadh to save the agreement and help prop up crude prices.

The development will revive oil industry fears that major producers are embarking again on a battle for market share, especially after Saudi Arabia threatened to raise output steeply if no freeze deal was reached.

Eighteen countries, including non-Opec Russia, gathered in the Qatari capital of Doha for what was expected to be the rubber-stamping of a deal – which has been in the making since February – to stabilise output at January levels until October.

But Opec’s de facto leader Saudi Arabia told participants it wanted all Opec members to take part in the freeze, including Iran, which was absent from the talks.

After five hours of fierce debate about the wording of a communique, delegates and ministers announced that no deal had been reached.

“We need more time to reach an agreement among all Opec members and main producers to freeze production, which can be by June,” an Opec source said.

The failure to reach a global deal could halt a recent recovery in oil prices.

“With no deal today, markets’ confidence in Opec’s ability to achieve any sensible supply balancing act is likely to diminish, and this is surely bearish for the oil markets where prices had rallied partly on expectations of a deal,” said analyst Abhishek Deshpande.

Brent crude has risen to nearly $45 a barrel, up 60 per cent from January, on optimism that a deal would help ease the supply glut that has seen prices sink from levels as high as $115 in mid-2014.

Iran’s oil minister Bijan Zanganeh said on Saturday Opec and non-Opec should simply accept the reality of Iran’s return to the oil market. “If Iran freezes its oil production . . . it cannot benefit from the lifting of sanctions.” – (Reuters)