Exploration asset is in the wantaway Western Sahara region, which Morocco thinks of as its southern provinces 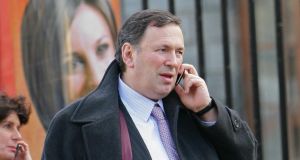 Drilling is scheduled to begin this month at the Moroccan exploration project of San Leon, which is run by former Smart Telecom chief executive Oisin Fanning. When it happens, expect another backlash of anger against Fanning and San Leon from assorted charities and activist groups.

San Leon’s exploration asset is located in the wantaway Western Sahara region, which Morocco thinks of as its southern provinces. Leaders of a would-be government in exile for the disputed region have condemned San Leon’s plans, coming as they do with the imprimatur of the Moroccan government.

The exiled politicians have complained to the United Nations about the drilling plan, while a network of rights groups, industry critics and charities have also joined forces to challenge the move.

They regularly send a stream of press releases from Stockholm, where the opposition appears to have coagulated. Fanning is unrepentant about the Western Sahara project, which he says is fully legal, above board and in the interests of the people of the region.

In the meantime, he will plough ahead trying to make a return for his shareholders, who include legendary London hedge fund investor Martin “The Rottweiler” Hughes.