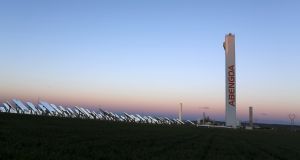 Renewable energy giant Abengoa has avoided the largest bankruptcy in Spanish history – for the time being at least – by securing an agreement with its creditors.

The Seville-based firm needed the backing of 60 per cent of its lenders by Monday in order for the so-called “standstill accord” to come into affect. Abengoa managed to secure the support of 75 per cent of creditors, giving it up to seven months in which to restructure.

The company’s problems came to light in November, when it filed for preliminary creditor protection, prompting speculation that one of Spain’s biggest firms was about to collapse. Since then the value of its stock has fallen by over 70 per cent on the Spanish bourse.

The creditor approval secured Monday means it can push ahead with plans which include slashing its €9.4 billion obligations by carrying out a debt-for-equity swap.

“This is a key step in the restructuring process of Abengoa and will allow the company to complete the financial viability plan that has already been accepted by lenders in order to stabilise business and protect its leadership in the energy and environmental sectors,” the firm said in a statement.

A small family electricity firm founded by the Benjumea family in the 1940s, Abengoa grew to become a major energy company, expanding into solar energy and biofuels.

By 2015, it was employing an estimated 29,000 people worldwide and had invested $3 billion in the renewable industry in the United States, where it has a major presence.

However, a string of changes at the top of the company have reflected its recent problems. Felipe Benjumea stepped down as chairman in September and is currently under investigation. His successor, José Domínguez Abascal, was replaced earlier this month. In November, Javier Garoz, head of the group’s US unit, also left.

Abengoa says it has been hurt by government energy reform which slashed subsidies for renewable energy firms following a boom in the sector. The company says it has lost out on €1.5 billion as a result of the reform.