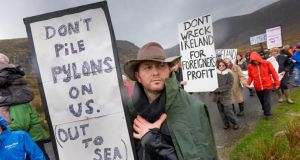 Anti-Pylon protest walk in Co Waterford. Minister for Communications, Energy and Natural Resources Pat Rabbitte said he wanted to see State company, Eirgrid, which is working on three expansions of the country’s electricity network, do everything reasonable to secure community acceptance.

Addressing the Energy Institute’s annual dinner, Minister for Communications, Energy and Natural Resources Pat Rabbitte said he wanted to see State company, Eirgrid, which is working on three expansions of the country’s electricity network, do everything reasonable to secure community acceptance.

“However, the engagement between company and community must be reasonable and must be tempered by what constitutes the public interest,” he said. “No Government can walk away from its responsibility to provide the country with a secure energy supply. Nor can any Government wantonly inflict unnecessary costs on energy consumers to allay concerns that are not well founded.”

The Minister’s speech came in the wake of protests against Eirgrid’s plans, most recently in Waterford, where there is opposition to possible routes proposed for the pylons that will carry the high-voltage power lines needed to transmit electricity. Opponents say the lines pose health and environmental risks and should be put underground.

However Eirgrid says two independent studies and a Government commission found that this would be far more expensive. Electricity consumers would shoulder any extra cost for developing the grid.

Mr Rabbitte said the Republic cannot attract investment and provide jobs without a modern energy system. He also said Eirgrid had to deliver a safe, secure and affordable supply throughout the country.

Promote exploration
At the same function, David Taylor, former head of the Sustainable Energy Authority of Ireland (SEAI) said the Republic could reap the rewards of its oil and gas resources if the State were to take a leading role in promoting exploration.

Mr Taylor, who is chairman of the institute said that a natural gas find large enough to make the Republic a significant exporter of the fuel would boost growth and cut prices here.

“I believe we are looking at a window of necessity where, for a whole swathe of circumstantial and policy reasons, we need to accelerate the pace of exploration drilling and create the conditions that, in the event of an oil and gas find, will begin to show substantial benefits within five years,” he said.

He added that otherwise, the Republic would remain locked into less secure and higher- priced gas .

9 Northern Ireland’s economy is threatened by more than Brexit

10 Economic unity is route to prosperity