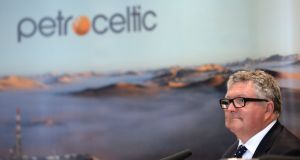 Brian O’Cathain, CEO at the Petroceltic. A hearing aimed at getting High Court approval for a survival scheme for exploration company Petroceltic has been adjourned after day long talks over employees concerns about the survival proposals failed to end in agreement. Photograph: Dara Mac Dónaill / The Irish Times

A hearing aimed at getting High Court approval for a survival scheme for exploration company Petroceltic has been adjourned after day-long talks over employees' concerns about the survival proposals failed to end in agreement.

The hearing will now open on Thursday by which time lawyers for the employees said they hoped agreement might be achieved.

All senior staff at Petroceltic voted against the survival proposals put to them by examiner Michael McAteer at creditors' meetings which provided they would get just 5 per cent of monies owed under “change of control” clauses in their contracts. About 30 staff are owed some €3.6 million.

Secured lenders and other creditors are expected to either support the scheme, or adopt a neutral position.

The examiner’s application for approval of the scheme was due to open before Mr Justice Brian McGovern on Wednesday but was adjourned at the outset to facilitate talks arising from the employees' concerns.

The talks continued throughout the day but, at 3.30pm, Michael Collins SC, for the examiner, said, while there had been optimism about a resolution, that had not worked and he was instructed to proceed immediately with the application for approval.

Lyndon MacCann SC, for Worldview Capital, a Swiss-Cayman fund believed to be on the verge of buying Petroceltic, agreed with Mr Collins.

John O’Donnell SC, for the employees, said not a single one had voted for the scheme put before them at the creditors' meetings and there had been very detailed “without prejudice” talks during the day which were at “a delicate stage”.

The difficulty arose because a proposal of a “radically different” nature had just that afternoon been advanced to the employees, one of whom was on a flight to Dublin as the court was sitting, Mr O’Donnell said. He needed to take instructions from all his clients about the latest proposals and would be unable to do so until that evening.

In those circumstances, he wanted the court to adjourn the matter to Thursday. It would not be sensible to proceed now on the basis of the earlier proposals the employees had opposed whereas, if there was a resolution overnight, the application could proceed on the basis of agreement of all sides, he said.

Judge McGovern said there was limited time available on Thursday because he was dealing with other matters but he would heard the application despite the time constraints.

Before Petroceltic International and two related companies - Petroceltic Investments Ltd and Petroceltic Ain Tsila Ltd - were placed under court protection last March, on the petition of Worldview brought without notice to Petroceltic, its secured debt of $240.8 million was bought out at a massive discount by Worldview and Elbrus Capital, another Cayman fund.

Petroceltic later said it would support examinership but insisted criticism in the petition of the present management of the company was “without justification” for reasons including it could not be held responsible for the oil price collapse.

An independent expert’s report has expressed the view Petroceltic has a reasonable prospect of survival as a going concern provided certain conditions, including securing investor funding and approval of a scheme of arrangement, are met.