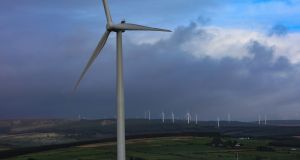 A High Court challenge has been brought over An Bord Pleanála’s categorisation of an application seeking planning permission for a wind-farm development on sites in counties Cork and Waterford. Photograph: Valerie O’Sullivan

A High Court challenge has been brought over An Bord Pleanála’s categorisation of an application seeking planning permission for a wind-farm development on sites in counties Cork and Waterford.

The board has yet to decide whether or not to grant permission and the case is over its decision to categorise it as a strategic infrastructural development. The challenge is by Paddy Massey, chairman of a local residents group that opposes the proposed development involving a total of 17 turbines on the two sites.

Among various claims, he says the description of the proposed development as a wind farm is flawed and inadequate because it does not specify how it satisfies the criteria for strategic energy infrastructure, that is, a wind-farm installation with more than 25 turbines having a total output of more that 50 megawatts.

His case includes arguments that a provision of the planning Act is unconstitutional and contrary to EU directives because it excludes the public from participating in the consideration of whether or not a proposed development falls within the definition of strategic infrastructure under the planning Acts.

It is also claimed that public consultation provisions of relevant European directives have not been validly transposed via the Strategic Infrastructure Development Regulations.

On Thursday, Mr Justice Denis McDonald told Michael O’Donnell, for Mr Massey, with an address at Knockanore, Tallow, Co Waterford, that he was satisfied the applicant had raised the necessary substantial grounds for judicial review. The judge admitted the matter to the High Court list which fast-tracks cases concerning strategic infrastructure developments and made directions for progressing it. A hearing date will be fixed at a later stage.