The mine, which began operations in 1999, employed up to 400 people at full production 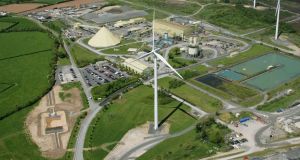 Operations at Lisheen began in 1999. Over its life, 22.4 million tonnes of ore was mined at the site

Vedanta Resources has said its Lisheen mine in Co Tipperary made its final shipment last week, completing planned closure of the site.

The group , which also produces copper, coal, aluminium, lead, iron ore and oil, said mining activity at the zinc and lead mine had stopped in November.

The mine’s closure, which was announced last April, will further tighten the supply of the metal used to galvanise steel.

The zinc market has tightened after last year’s output cuts by Glencore and the closure of the Century mine in Australia.

Lisheen employed between 360 and 400 people at full production, Vendanta said.

The mine consisted of an underground mine, concentrator and backfill plant.

“Lisheen has made a hugely valuable contribution to Vedanta and has also made a very positive impact to the local and national economy, bringing significant employment opportunities to the area,” said Deshnee Naidoo, chief executive, Vedanta Zinc International.