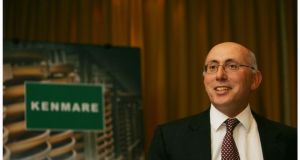 Kenmare resources managing director Michael Carvill: is set to receive a further 125 per cent on base salary for on-target performance over the next two years.

Kenmare Resources has became the latest London-listed company to experience an investor revolt over executive pay after a third of shareholders voted against approving a recalibrated bonus package for senior staff.

More than nine in 10 voted in favour of a redesigned incentive package that runs from this year. That incentive plan replaces a previous scheme that failed to pay out to executives over the past two years as the Dublin-based miner slumped into loss because of declining demand for titanium-oxide produced at its Moma mine in north Mozambique.

However, 34 per cent of shareholders voted against an extra bonus scheme aimed at rewarding key staff who face the prospect of no share bonuses under the main revised scheme until 2015.

Elizabeth Headon, chairwoman of Kenmare’s remuneration committee, called for shareholders to support the additional bonus scheme in its annual report.

She described the scheme as designed to “bridge the gap” between an old and new compensation scheme being introduced at a time of poor global demand for the company’s output when targets for production were being hit.

Mr Carvill said he accepted the bridging scheme had been opposed by proxy voting agencies, but had been proposed by external adviser PwC and backed by most shareholders.