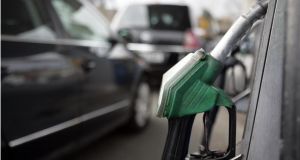 Ireland is still the 14th most expensive place in the world to fill your car with petrol. Photographer: Dara Mac Dónaill / The Irish Times

The Islamic State (IS) takeover of several oil-producing areas in Iraq and the effects of the global recession on the development of alternative energy sources have played an important role in the falling price of petrol.

Oliver Lupton, former chief executive of the Irish Petroleum Retailers Association (IPRA), told RTÉ’s Morning Ireland the IS takeover of large oilfields in northern Iraq during the summer was the initial trigger in the recent fall of petrol prices.

“They were selling oil at any rate so they could get to fund their armaments and survival of their war,” said Mr Lupton.

According to a recent report in the The Washington Post, IS is producing between 25,000 and 40,000 barrels of oil a day from Iraq and Syria.

Mr Lupton said the rising popularity of alternative energy sources such as air power, shale oil, solar power and wind power also played a role in falling petrol prices at a time when demand for traditional energy sources was down because of the global recession.

He said the Organisation of the Petroleum Exporting Countries’ (Opec) decision not to cut supplies in order to raise petrol prices was connected with both protecting market shares and international political developments.

“It would appear from a business point of view that they’re trying to defend market share but I would suspect that there is a political element involved here,” he said.

“In relation to the Russian situation and Iraq, Opec are flexing their muscles and saying no, we’re not going to allow these people to get a hold.”

Despite the recent fall in oil prices, Ireland is still the 14th most expensive place in the world to fill your car with petrol. According to Venezuela: EUR:l">research compiled by Bloomberg in early December, a litre of petrol costs on average €1.48 in the Republic. This puts the country behind the UK, which is ranked in 8th position, with average petrol prices of €1.55/litre.

While it has its own oil reserves, Norway is nonetheless the world’s most expensive country for petrol. Rather than subsidising the cost of fuel at the pumps, it uses oil profits for national services such as health and education.

Venezuela is the cheapest country in the world to fill up your car, where a litre of petrol costs just €0.01.

1 Admission of mistake in Oxford vaccine dose raises doubts over reliability
2 Cliff Taylor: Deal or no deal we are now heading for a hard Brexit
3 Move to EU or face disruption, City of London is warned
4 Fiona Reddan: Who’s afraid of Revolut? Not AIB and BOI it seems
5 Longboat Clinical acquired in multimillion euro deal
6 Foxconn to shift some Apple production to Vietnam to minimise China risk
7 Must I pay tax on sale of inherited apartment in Baltics?
8 Banks roll out red carpet for wealthy private clients
9 State may face €1bn in compensation in Covid-19 case, Press Up claims
10 Dubliner to head up advertising agency BBDO’s US operation
Real news has value SUBSCRIBE