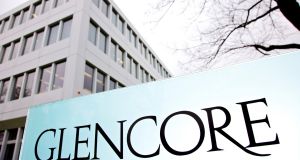 Mining and trade house Glencore Plc has raised $8.4 billion (€7.5 billion) in commitments as part of an early refinancing of its short-term debt, sending its shares up as much as 16 per cent on Wednesday.

Glencore’s net debt of about $30 billion – one of the highest in the sector – was under scrutiny as multi-year prices for commodities such as copper and coal pressure its finances.

Markets have been concerned that Glencore’s high level of debt could compromise its ability to run its trading unit effectively, Bernstein analyst Paul Gait said.

Ratings agency Moody’s Investors Service downgraded Glencore’s credit rating to one notch above “junk” in December. However, the company’s ability to secure debt in this environment had allayed some shareholder concerns, Investec analyst Marc Elliott said.

The company said it signed $7.7 billion of commitments to its new revolving credit facility, which will replace its existing $8.45 billion loan that was agreed last May.

The new loan was scaled back ahead of a launch of a wider syndication to a group of about 30 banks scheduled for the second quarter of 2016.

Wider syndication will be aimed at allowing banks that did not participate in senior syndication a chance to take part in the loan as well as scaling back commitments of the senior banks rather than securing incremental amounts for the loan, a source said.

“At a time when the commodity sector is under close scrutiny in terms of its ability to weather the current storm, a bounce back and being in a position to honour borrowings suggest progress for Glencore,” said Mike van Dulken, head of research at Accendo Markets.