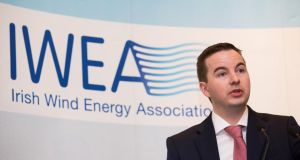 The Irish Wind Energy Association, the lobby group for wind farm developers, held its annual conference on Wednesday at the Doubletree hotel, formerly the Burlington, in Dublin.

Windmill conventions tend not to attract very many comedians, although Brian Ó Gallachóir, a University College Cork energy engineering lecturer who gave a speech to delegates, did his best to raise a giggle.

Ó Gallachóir spoke about Ireland’s struggle to reduce emissions. When the European Union dairy cap is lifted next month there’s sure to be an upsurge in flatulent cows all over the place. Cattle toots are a huge source of greenhouse gases.

Reducing emissions in agriculture, Ó Gallachóir mused, won’t be an easy task. “Unless you have a shotgun,” he quipped, prompting the biggest laugh of the day. It’s probably unlikely the Irish Farmers’ Association will be booking Ó Gallachóir for its annual conference anytime soon.

The wind lobbyists, or Big Wind as the economist Colm McCarthy sometimes calls them when he’s feeling facetious, have also set up a website, windfacts.ie. The site is supposed to bring the truth, as the industry sees it, to the debate about wind energy. Wind farm developers are the enemy in several communities around the country.

The site appears to have been inspired by the wind industry’s brethern in Canada, who set up windfacts.ca in 2013.