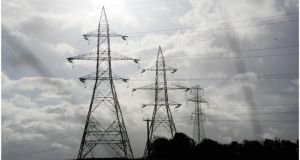 The ESB’s unions are threatening to strike and are refusing to co-operate with further cost-cutting measures at the State-owned energy group as the row over the €1.7 billion pension shortfall continues.

The ESB group of unions claims the company is refusing to recognise the pension pot’s shortfall, which would leave current staff with just 4 per cent of their benefits should the plan be wound up.

The company says that it has already won approval from the Pensions Board, which regulates such schemes, for a plan that will plug the hole by 2018.

Following a meeting yesterday, the group of unions issued a statement saying that it plans to call a delegate conference of ESB shop stewards to “consider a motion for industrial action, up to and including strike action”, unless the company accepts liability for current and future pension scheme shortfalls.

Secretary general Brendan Ogle will also write to the company informing it that the unions are no longer available to discuss or co-operate with any further cost-cutting or productivity measures at the ESB.

The company did not comment yesterday. A spokeswoman said that it had not received any communication from the group of unions.

Exchequer dividend
The dispute over the pension shortfall escalated last month ahead of the company’s annual general meeting, where it was agreed to pay the Exchequer a €74.4 million dividend.

Staff maintained that neither the annual dividend nor a special payment of €400 million, due next year pending the sale of shares in power plants in Spain and Britain, should go ahead as the company has not properly accounted for the retirement scheme deficit.

Four workers are planning to take legal action to halt the payments, while the group of unions says it will take all necessary industrial, legal and political action to get a resolution.

The deficit is based on the minimum funding standard laid down in recently passed pensions legislation, which calculates a scheme’s liabilities in the event of it being wound up.

The ESB points out that its actuaries have confirmed that the scheme can meet its liabilities as they fall due.

It also says that a plan to address a €2 billion shortfall pointed out by the actuaries in 2010 is on target.

The measures taken to tackle this included increased staff contributions, reduced benefits and a €591 million cash injection from the company.

Along with this, the company argues that the minimum funding standard cannot apply to the ESB pension plan as the 1942 legislation which established it in the first place does not envisage the scheme being wound up.

Part of the row is rooted in the fact that since the plan to address the deficit uncovered in 2010 was implemented, the company’s accounts have treated the pension scheme as defined contribution rather than defined benefit, which means it is no longer liable for any deficits in the scheme.