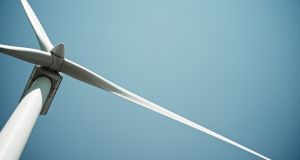 Two Energia projects planned to be built by 2030, one in the North Celtic Sea and the other in the South Irish Sea, have been ranked third and fourth on the priority list. Photograph: iStock

A company planning two offshore wind energy projects costing €4 billion has claimed that delays created by a new system of prioritising applications for approval to do the work is jeopardising its investment.

Energia Group RoI Holdings DAC and its subsidiaries which have applied for foreshore licences to do the work, Energia Renewables RoI Ltd and Energia Offshore Wind Ltd, want the High Court to quash the decision last October by the Minister for Housing, Local Government and Heritage and the Minister of State for Local Government and Planning to introduce a “priority order” system of seeking approval under the Foreshore Acts 1933-2014.

As a result of the new system, two Energia projects planned to be built by 2030, one in the North Celtic Sea and the other in the South Irish Sea, have been ranked third and fourth on the priority list.

Energia says the new system was never provided for under the Foreshore Acts and it interferes with its (Energia’s) entitlement to have its applications considered under those Acts.

Energia had made two applications and was entitled to have them considered in a timely and efficient manner, it says. The adoption of a policy whereby particular projects are favoured to the detriment of others gave rise to a reasonable apprehension of pre-judgment and/or bias, it says.

On Monday, Mr Justice David Barniville admitted Energia’s case to the fast track Commercial Court on consent between the parties. The judge noted the Ministers were defending the case. It comes back to court in July.

In an affidavit seeking entry of the case to the commercial list, Energia group’s head of corporate affairs, Derek Scully, said the two projects, costing some €4 billion, will create 1,400 direct jobs over 48 months. They have already spent around €1 million on them, including some €140,000 on applying for foreshore licences.

He says the delay in processing the applications makes it impossible to progress the projects and the investments made “are increasingly jeopardised as a result of the delay”.